Why did Imperial Star Destroyers change?

I'd like to know though if there was any particular real world reason that the design of the star destroyers changed (Movement of the turrets, change of the shape of the targeting array). The difference is odd in that it seems to big to be an accident (Like the change in the surface greebles), and too small to be intentional. Most people don't notice until it's pointed but, but it's obvious enough that you can easily tell once you know what to look for.

If it was to intentionally represent technological improvement in universe that's reasonable if someone involved in the production has ever confirmed that but I'm not looking for speculation.

For A New Hope, they had a single 3 foot model for the Star Destroyer. That's actually kind of small for a miniature which had as many close ups as it did, and shooting with it can't have been easy. When they did the sequel, they decided to upgrade to a brand new 6 foot model produced from scratch that would have more surface detail, better lighting, and be easier to move the camera around. They did a pretty good job matching the overall look, but they didn't worry too much about the details. A lot of the original parts were literally pieces from other kits that wouldn't fit the new scale even if they could figure out where they'd come from originally. They were hardly documenting the origin of every piece.

Cribbing a bit from Wookieepedia I think I can explain.

They are two different models of Imperial Star Destroyer class I and II.

There is not much in the Disney canon about this at all, in fact, they have class II operational 5 years BBY in Rebels, which does not make much sense.

In Legends, the class II was introduced around 0 BBY but was not active in great numbers then, which is why you don't see it in A New Hope. It was an updated version of the class I which had been in service for 22 years. By the Battle of Hoth, they were in use in greater numbers.

So while on screen you are seeing a new model come in within the space of three years, it is not one brand new space ship being replaced by another new one, but a very old model having an updated version come out.

Most information from here

Out of universe, I have not seen any concrete evidence that what I am about to say is correct, but...

The reason is Merchandising

This article explains a lot about the toy industry and what StarWars did to it in the beginning, however J.J Abrams did say this,

Yet even when the toys seem to supersede the films, the people behind the scenes still hold true to Lucas’ original sentiment. The story rules.

“What’s been incredible for me has been the creative freedom and the desire to make something hopefully worth people’s time – and not a commercial for toys,” J.J. Abrams told Rolling Stone. “I’m not itching to be involved in creating things that end up in a landfill. I wanted to tell a story.”

But, still, Disney did not buy the franchise to lose money. Why Buying Star Wars and LucasFilm Is the Best $4 Billon Disney Ever Spent

Star Wars is a merchandise monster

While I'm sure Disney has sold a lot of products tied into the Avengers universe, the numbers can't approach the retail phenomenon that is Star Wars. Disney has smartly tapped into the nostalgia many parents likely feel when it comes to Lucas' universe. It made buying new Star Wars toys an event, which kicked off Sept. 4, dubbed Force Friday, when it launch the first batch of Force Awakens merchandise.

"That day alone Star Wars merchandise sales are estimated to have neared $1 billion," The Atlantic reported in late November. Overall, Star Wars merchandise sales could reach a potential $5 billion in the first year after the release of The Force Awakens, which could result in $500 million in licensing and retail revenue for Disney, according to Macquarie Securities analyst Tim Nollen as quoted in that article. And those predictions were made before the film was on its way to being the biggest movie ever.

Again I have no concrete evidence of this ,but this is also why I think they made small changes to millennium falcon, see below, they changed the round radar to a square one. Changing just little things like this on any of the original characters or sell-able items in the movie, will inspire collectors and new consumers alike to buy again, even if they have the original version. 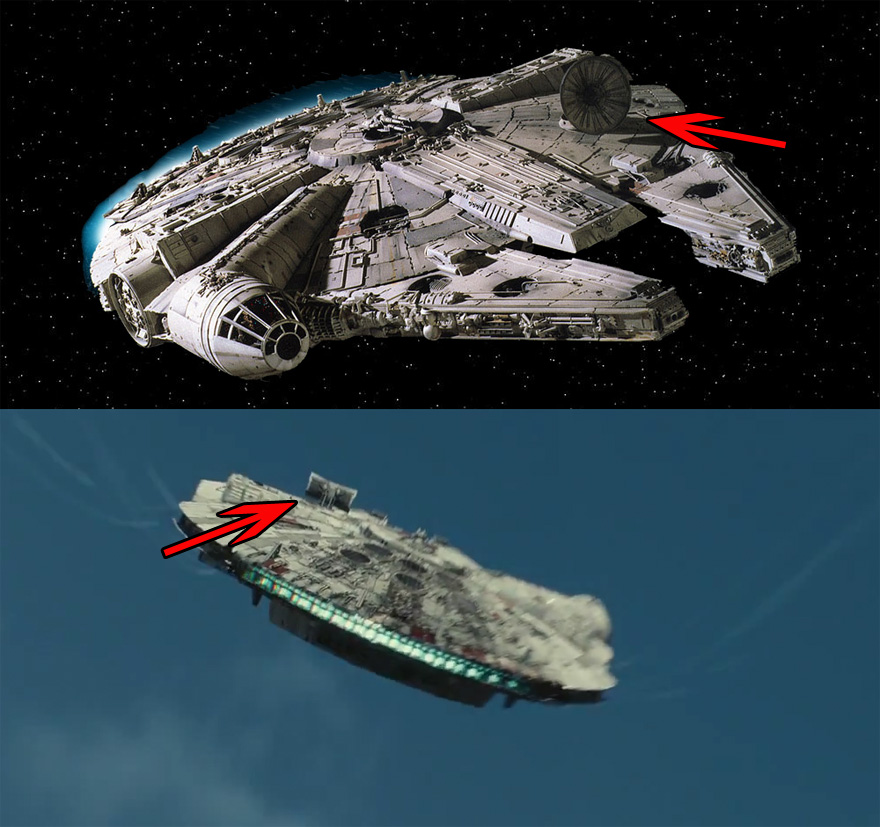 So I will leave you with a parting video that needs to be watched.

25 or 30 years is ages of difference in modern tech. There's no reason it wouldn't also be that way in the Star Wars universe. In the 60-70 years or so of Star Wars movie in-universe time star destroyers have changed. The Venator of the prequel era evolved into the Victory I/II, from there to the Imperial-I/II (and Tector variant), and finally to the new Resurgent class from Force Awakens.

Not the answer you're looking for? Browse other questions tagged star-wars spaceship production or ask your own question.