Who are these “barbarian invaders from outside the galaxy”?

For some time I have been wondering about the following cryptic reference which appeared in the Revenge of the Sith cross section book concerning the "Venator" proto-star destroyers:

These ships will see service for decades to come, as the Republic is transformed into the Empire. The Imperial Starfleet will justify its existence in unending war against separatist holdouts, dissident rebels and even, it is rumored, deterring barbarian invaders from outside the galaxy.

Here is the text as it appears in the book: 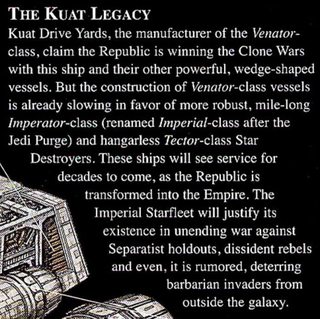 So here is my question: Who are these mysterious "barbarian invaders"? Is there something in the vast Star Wars universe to which this is probably referring, or is it an invention of the author?

I have tagged this question with "star wars legends" since the book was first published in 2005 and should probably be considered in that context.

The only invaders from outside the galaxy I know of are Yuuzhan-Vong (their page lists two other species from another galaxy, but those don't match the "barbaric" part of the description).

The author likely calls them barbarians because their religion, to which they adhered zealously, banned all technology. Everything used by Yuuzhan-Vong was organic in some way, even the generation ships they used to reach the galaxy far far away.

Their invasion was rather violent - same Wikia claims there were hundreds of trillions of causalities.

After the events of Episode VI, the New Republic was established (in Legends). I think it's only logical for them to use whatever remained after the Empire, including their ships.

I believe there was also a (Legends) theory that everything Palpatine did - getting rid of the Jedi, establishing the Empire - he did in order to protect the galaxy from Yuuzhan-Vong, whom he could sense were coming. It makes sense, really, because the Republic's military wasn't in the best shape, and Jedi were useless against them anyway because Force abilities had no effect on the invaders

27
Are C3PO and R2D2 different from normal Star Wars Droids?
67
Are Stormtroopers paid or rewarded in any way for their service?
42
Are Lightsabers ever used outside of combat?
10
What is the difference between the two novelizations of A New Hope?
11
Is Snoke a part of Operation: Cinder?
5
Old Star Wars Legends book set after ROTJ
15
Who are all these rebel pilots?