Why did Galen help complete the Death Star?

This question requires a little bit of background, so follow me on a little trip.

For some reason, the Empire needed Galen to complete the Death Star. He was a vital component to its completion due to the fact that he was one of the Galaxy's most brilliant minds in the field of crystals.

Galen had long since become disillusioned by the Empire and wanted nothing to do with them, choosing instead to live in the middle on nowhere with his wife and child.

Representatives of the Empire land on Galen's planet, try to convince him to help them finish the Death Star. By the end of this encounter, Galen's wife is dead and his child has been secreted away by a mad man, and Galen has agreed to help finish building the single most deadly weapon in the galaxy.

There are multiple problems with this. What leverage does the Empire have over Galen at this point? His wife is dead and no-one knows where his daughter is. There is nothing else Galen cares about, so why does he help the Empire?

Furthermore, it is clear that Galen is against the idea of building a giant genocide cannon, otherwise he would not have worked the weakness into the design...but why did he bother doing anything? One could argue that he feared for his own life, but that explanation does not fit with the fact that Galen was willing to risk being caught sabotaging the Death Star designs.

By not doing nothing, Galen contributed to the deaths of billions of people, and it could have all been avoided if he just said "no".

So, in short, What reason did Galen have to help the Empire finish designing and building the Death Star?

Galen explains his motivation in the movie in his message to Jyn:

When I was taken, I faced some bitter truths. I was told that, soon enough, Krennic would have you as well. As time went by, I knew that you were either dead or so well hidden that he would never find you. I knew if I refused to work, if I took my own life, it would only be a matter of time before Krennic realized he no longer needed me to complete the project. So I did the one thing that nobody expected: I lied. I learned to lie. I played the part of a beaten man resigned to the sanctuary of his work. I made myself indispensable, and all the while I laid the groundwork of my revenge. We call it the Death Star. There is no better name. And the day is coming soon when it will be unleashed. I've placed a weakness deep within the system. A flaw so small and powerful, they'll never find it.

Initially, he believed that they might be able to get his daughter. Then he realized he wasn't actually needed, failing to cooperate would simply slow them down, not stop them. So even if they couldn't find his daughter, he continued to work for them to make sure there was a flaw that would stop them.

Edit with thanks to Gallifreyan:

Here's the scene from the comic book, issue #2 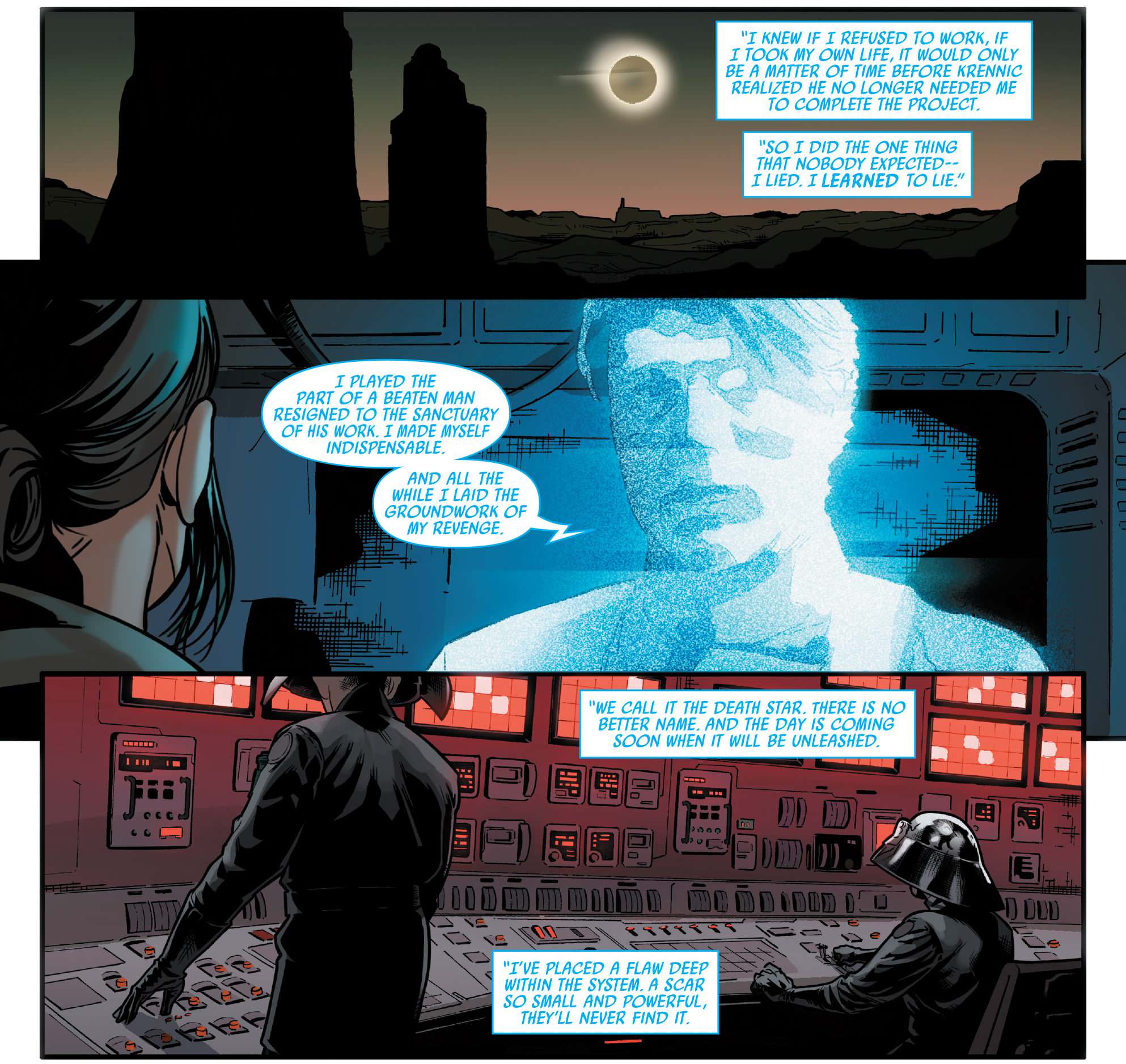 It's actually said in the film that he wasn't vital, just made the process quicker. He reasoned they would eventually figure out how to finish the Death Star without him so refusing would just delay the Death Star, not prevent it. By agreeing to help he could build in a weakness to a superweapon that would be made eventually anyway.

Not the answer you're looking for? Browse other questions tagged star-wars rogue-one death-star or ask your own question.

14
Why would Krennic trust Galen Erso?