I remember watching a film in the early 2000's. As I was living in Europe at the time, this was likely in German. I watched it with subtitles.

The core premise involved a young boy being kidnapped by a serial body swapper. The swapper would exchange bodies with young children to reverse his own aging so he could live longer. He did this with very industrial looking scientific apparatus (I remember black metal for some reason) as opposed to anything fantastical.

There was a protagonist who I think was a male detective trying to stop the kidnapper. Unfortunately, I only remember thinking the protagonist was boring so that isn't much help. He stopped the body hopping during the operation. The culprit's body was found dead. They thought they stopped him and rescued the child.

The key thing that stuck with me, however, was the ending. The culprit had a hand tic where he tapped his fingers against his thumb. In the very last shot, the child is doing the same.

That last scene and the body swapping really the main parts that stuck with me as I find myself with a similar tic and find the core idea interesting. Unfortunately, this means I mostly remember my wonderings about the concept more than the movie itself and frequently find myself remembering it as I drum my fingers.

This is almost certainly Farligt venskab. The cover art alone should trigger your memory if this is the right one - it's a big machine with black colored metal parts strapping the boy in. 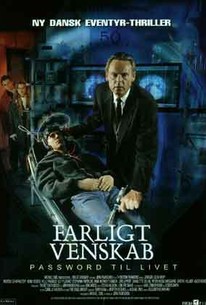 Frankenstein meets Big in this well-made thriller created for the computer generation (the film's subtitle is Password to Life). A dying physician (Ulf Pilgaard) changes bodies with a healthy but shy and socially inept teenager (Morten Schaffalitzky), who then spends the remainder of the film attempting to convince his dubious friends to help him get his body back. The film features comedian Ulf Pilgaard in a rare serious role (in Nattevagten [1994] he did his mad doctor bit so well that he won the Danish equivalent of the Oscar). Directed by actor Jørn Faurschou , Firelight Veins rather successfully straddles the fence between teenage angst melodrama and action-packed science fiction. ~ Hans J. Wollstein, Rovi

25
Movie where memories could be shaped into real-world entities
8
Book about a mysterious girl and evil non-human pursuers
5
Movie with alien nano machines passed by a cigarette
4
What horror movie features half human crawling creatures with no eyes?
10
Novel from around 8 years ago about kids staying young and being loaned to infertile parents
7
movie where people rented empty bodies to travel
17
Old animated film with bald blue people