It was set in the (US) wild west, but had a foreboding house. There was a cowboy and I'm pretty sure there was an alien. I don't remember why I keep thinking it was written like a gothic romance novel.

I'd like to read it again, simply because it was so 'odd'.

It might be The Hawkline Monster: A Gothic Western (1974) by Richard Brautigan. That is a critically acclaimed science fiction, western, gothic, romance novel that was published in the mid-seventies. The story takes place around 1900. Two gunmen are hired to do a job at a creepy, isolated house on the western plains. My paperback has a great painting of the house on the cover. The gunmen were hired by twin sisters to kill a monster that lives in the ice caves beneath their house. Their father, a scientist who was conducting experiments in his basement laboratory, disappeared and they believe he was killed by the Hawkline monster. The novel reads like a product of the sixties -- surreal and drug-trippy in tone. 'Odd' describes it well. Brautigan was a celebrated counter-culture writer and this was his only foray into science fiction. His most famous novel is the even more odd Trout Fishing in America (1967). 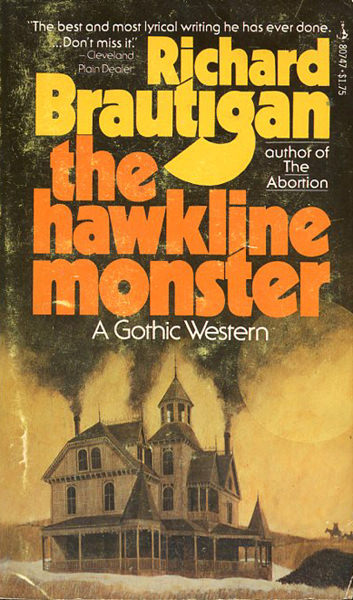 Not the answer you're looking for? Browse other questions tagged story-identification novel horror western or ask your own question.

8
Identify story about girl on alien planet with western feel
9
80s Fantasy novel evil twin and swordplay
4
About reincarnation "forever and a day" blue cover
6
Fantasy novel with boy who can shapeshift into a jaguar
6
70s? 80s? Book where a Cowboy/Gunfighter is possessed by an alien
4
ID a youth novel about an evolving creature that grows over time with several illustrations throughout
9
Sci-fi novel with an "Avatar"-like premise: disabled character is put into an alien body to study/spy on aliens