Trying to remember an old cartoon with triangular spaceships

I remember not much of this cartoon except watching it as a kid, in Australia and the fact the antagonists used triangular spaceships that floated around. I remember one scene where a protagonist captured one of these triangle spaceships and was floating away from some girl on a floating island who was begging for him to stay.

I think there was a main female and male character, and one scene I remember was their spaceship, a classical L wing or X wing fighter-looking starship, I think it may have been orange and white or silver? Anyway, it crashed into a mountain but remained mostly intact; if I recall correctly it was actually just stuck between some rocks.

I remember the male pilot becoming frustrated and revving the engines up and down, before the female co pilot stopped him, saying he'd overload them or something.

This may be "Battle of the Planets".

It was shown on Australian afternoon TV in the 80s, which is when I saw it.

their spaceship, a classical L wing or X wing fighter-looking starship, I think it may have been orange and white or silver

Hmm, google is showing me a spaceship that's mostly blue, with orange and white: 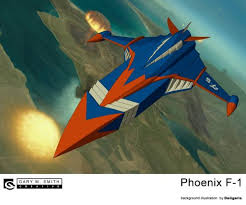 However, there are some in white, so there may have been a few iterations: 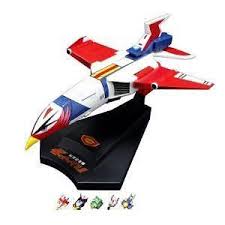 There were five protagonists rather than two, but anyone only seeing one or two cartoons could easily remember one of the guys and Princess in a scene together.

I don't remember the particular scenes described but, as I'm certain I didn't see every episode, so I'm throwing it out as a possible answer anyway.

7
Remembering a 90's childrens book about disease, female protagonist with a mutant sheep?
7
Anime movie: decayed futuristic world, dragons made of vines!
37
I am looking for a cartoon, old one, with virtual reality?
3
Old Cartoon about animal powers and wristbands
9
Old movie where main role reset whole planet earth timeline to the beginning of life on Earth
10
Fantasy book with a young male transported to another world; giants and strange sexual themes?