I read this scifi/Greek mythology graphic novel I read a few years back ~2013-14. The main premise was that the Greek gods were actually a space-faring civilization from a different dimension, while the Titans were criminals who were to be imprisoned in a pocket dimension. Something went wrong, bringing them all to this dimension, crash-landing on our world.

In the accident which lead them all here, they were all affected by a kind of radiation, leaving them all with unusual powers.

Titans spread out. Greek gods hunted them down, trying to protect humanity.

It is a sci-fi twist to the Greek mythology we know. It was a free web-comic/graphic novel I found online. 2013-2014 was when I came across it.

Wayward Sons: Legends. I enjoyed reading that webcomic -- all of it that was online at the time -- several years ago. I just now checked, and confirmed that it's still on hiatus. Its most recent page (if you follow the link) says it will be returning "Late in 2015." Obviously, that hasn't happened.

The basic premise is just as you recall. The good guys (called "Pantheans" after their civilization, or sometimes "Ulympeans" because they were the crew of a warship called "the Ulympea") are mostly modeled on Greek gods and goddesses, with distorted names. (Occcasionally someone has a name derived from some other ancient culture, such as the Sumerian myths.)

The bad guys -- the escaped convicts, most of whom accept the leadership of "Kronos" -- are often called "Tytans" because they were all being transported on the prison ship "the Tytan." All of the sentient beings involved find themselves crash-landing here on Earth -- where ordinary Bronze Age humans were already living. And as time goes by, the Ulympeans and Tytans who were exposed to radiation begin to manifest odd superpowers which resemble what we might expect based on the myths.

Here's a partial cast roster to illustrate how the distortion of names was achieved. See how many names you can match up with the "original" versions (which, we are supposed to assume, are actually the ones that have been distorted over the last few millennia). 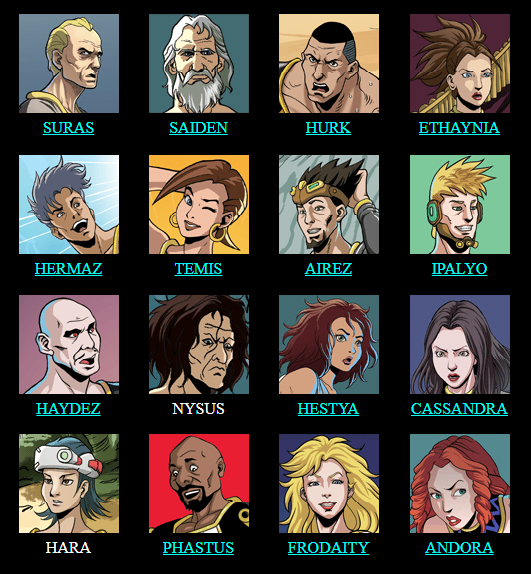 Not the answer you're looking for? Browse other questions tagged story-identification soft-sci-fi webcomics greek-myth or ask your own question.

12
Novel where scientists use a weapon to make people think they were being invaded from space
13
Trying to find a urban-fantasy novel. Romantic comedy about greek gods and muses
5
Looking for the name of a graphic novel, scifi, read in mid 80s
16
Seed ship, unsexed person, cover has golden person attached to ship by umbilical cord
7
Novel series about a group of 6 teens with powers (cause-and-effect, metabolism, bacteria, etc.)