Who/What is the 'Classified' in this chart?

On the Warhammer Community site around the end of last month there was an article about a new unit, the canid.

In the article there was one detail that jumped out at me and I have not been able to find anything explaining it. There is an image detailing the typical guardsman's chain of command but one spot on the chart is identified as 'Classified'.

I am not as knowledgable to the Imperial Guard so I don't know if this is only hidden in-universe and known to us or if it is something else entirely. Does anyone know who or what 'Classified' is referring to? 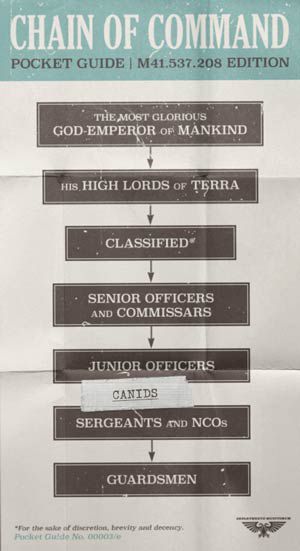 The caption that describes the redaction "for the sake of discretion, brevity, and decency" leads me to believe that they're talking about His Divine Majesty's Most Holy Inquisition. The Inquisition deals primarily with heretical cults, demons, and aliens - things that the average Guardsman is not supposed to concern himself with, save for an appropriate level of hate and fear. Therefore, discussing the Inquisition in any sort of detail is generally taboo.

Finally, it's worth noting that the chart is necessarily simplified for the benefit of the poor bloody Guardsman in question. Neither Inquisitors nor Commissars are technically in the chain of command. (Colonel-Commissar Ibram Gaunt being the exception that proves the rule: his dual rank gives him command authority and any number of political and administrative headaches that indicate why that's not usually done.) Of course from the perspective of an ordinary Guardsman, or even an officer, disregarding the "requests" of a Commissar or Inquisitor is likely to end badly, possibly even in summary execution, so as a practical matter the chart is correct.

the important thing to note here are 2 things. It has a mark that notes "For the sake of discretion, brevity, and decency." And the fact that its specifically the chain of command for a imperial guardsman.

In between the "Senior officers and commissars" and the High lords of terra. There are a lot of different people and organisations.

I'll try to list them in rough order:
Adeptus Terra:

And thats not even dealing with all the different ranks within each of them. so thats brevity tackled for sure.

Discretion could also be of the other branches of hierarchy Will also consist of organisations or people of which the common guardsman would have no clearance to know about.

Not the answer you're looking for? Browse other questions tagged warhammer-40k games-workshop or ask your own question.

4
What is the name of this story about a psychopathic priest
3
Who is The Sigilite?
2
What is the current date in W40K?
22
What kind of tyranid is this?
2
WH40K: Deathwatch: What helmet is this?
23
What stops the Chaos gods creating an infinite number of daemons?
5
Did Games Workshop make a big mistake in the 'Siege of the Imperial Palace' diorama?
8
Is this the Emperors sword?
6
Who is the goddess Nurgle tests his potions on and is she in both universes?
5
Does the 40K universe have an equivalent of Kevin Feige?