I have only read the one book. I believe it was called The Apprentice or something similar.

It is a very popular series with a lot of books.

The one I read was about a young man who left his home to study with a famous magician. He lived in what I think was an old castle or something with a large tower.

A few things more details I remember: He had to clean out the library, the place was haunted (he would see people or scenes from another time and they rode on falcons and fought orcs.)

The magician was friends with a king. The orc scene I'm recalling was when they were flying on the back of the falcon, or some large bird im remembering as a falcon, over a marsh type land one of the birds was shot down in some way orcs started coming out of what I'm trying to remember think was a woodsy area and the apprentice had just learned some magic was using to keep them away and another large orc who could actually do magic came out and the magician showed up just in time to save the apprentice.

Possibly this is Magician: Apprentice by Raymond E. Feist, the first book in the (extensive) Riftwar saga. This is a long and well known series of books. The boy does indeed leave his home to learn magic at the hands of an older wizard. There are orcs and ghosts but I can't recall anyone riding on a falcon. 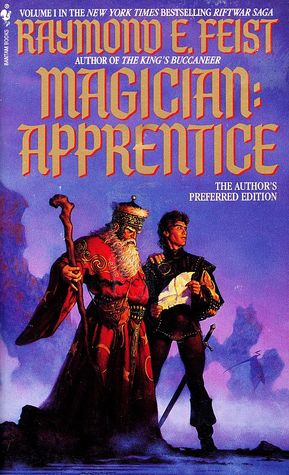