60’s or earlier short fiction about an object that encompasses the world, and a woman’s name repeated

OK, this one is a long shot. I remember almost nothing of this story, not even if it is Fantasy or science fiction. Only that is was rather short story, certainly not a novel. And that I read it in the 60’s.

The main character is looking for a strange object (Magical? Or man-made through advanced science?) the name of which I forgot, in which one can see the entire world. Even stranger, it might maybe even encompass the entire world, if I remember properly.

In fact, I was reminded of this story by Escher’s “Hand with reflecting sphere” one can find for instance here at this link or pictured below. But it has no direct link with the story, just as a jog to my memory.

In a very emotional scene, he finds this object (I am not even sure it is really spherical) while repeating as if a mantra the name of a woman. I think the name is in three parts, but (first name, middle name and last name), or (first name, maiden name, husband’s last name), I don’t remember. That’s it. Any ideas? 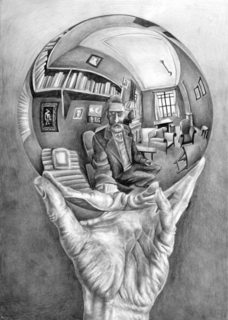 This sounds like "The Aleph" by Jorge Luis Borges, written in 1945, in which the main character, who recently lost his love, isn't specifically looking for this object, but rather comes into contact with the cousin of his love, a poet who is creating an epic poem describing the entire world, and Borges (the name of the character) discovers his secret:

Daneri said he'd be speaking with him that afternoon; then he hesitated, and in that flat, impersonal voice we drop into when we wish to confide something very private, he said he had to have the house so he could finish the poem—because in one corner of the cellar there was an Aleph. He explained that an Aleph is one of the points in space that contain all points.

The Aleph?" I repeated.

"Yes, the place where, without admixture or confusion, all the places of the world, seen from every angle, coexist. I revealed my discovery to no one, but I did return. The child could not understand that he was given that privilege so that the man might carve out a poem! Zunino and Zungri shall never take it from me—never, never! Lawbook in hand, Zunni will prove that my Aleph is inalienable."

The scene in which he repeats the woman's name is actually him looking at portraits of his love just before seeing the Aleph (which at this point he doubts the existence of, thinking the cousin mad), and in fact Carlos offers as temptation for seeing the Aleph the attractive idea that he can see every portrait of her in existence at the same time:

I approached the portrait.

Carlos came in shortly afterward. His words were laconic, his tone indifferent; I realized that he was unable to think of anything but the loss of the Aleph.