Tip of my tongue, this was a hardback book, marketed as science fiction, that I read in the late 1980s to early 1990s in Ashland, KY in English. The protagonist is a teenage boy on another planet whose father does bioengineering, designing custom pets. The protagonist's mother was deceased at the start of the book. There were at least two custom pets who frequently accompanied the protagonist with one being a waist-high "Godzilla" complete with being able to breath a "very small" flame when he felt angry enough, and the other being a waist-high mammoth. I want to say that those particular pets were designed by the protagonist's mother, and were therefore of sentimental value, but that they'd proven not commercially viable, and that in general the father was having to transition to other work. I think there was another pet, some sort of an otter or other aquatic creature, with the boy trying to train it to do actual useful work herding fish, but it just wanted to play.

I remember at the beginning of the book that the boy is doing something in the garden, which I remember mainly because the mammoth pet kept trying to "help" by digging everything up for him, after which he has to retrieve some of the pets who've escaped to a nearby hotel. I think, prior to that, he fails to get the otter-like pet to do something useful in an attempted demonstration. At the hotel, he winds up using a hover-pallet (maybe a floating tray for food?) in a way that winds up overloading it and causing him to crash to the floor. He also meets a young girl who turns out to be the daughter of a rich man, who smooths things over with the hotel basically by offering to pay for all damages, while indicating interest in buying the pets (with the protagonist having misgivings that she'll just but them then discard them like she probably did expensive toys).

Later in the book, the protagonist comes to realize that the planet is being invaded, and he winds up fighting the invaders (I don't remember if they were human or alien invaders) with the help of the girl and the pets. Details are fuzzy for me other than that there's a human traitor (I think revealed when they fatally shoot the friendly alien mail-carrier, who I think was kangaroo-shaped), that part of the invader's technology involves rods that they insert into blocks of explosives to create a timer, and the protagonist getting the otter pet to do something to deliver the explosives to drive off, or at least sabotage, the invaders. I don't remember if said pet survived the process.

The only other detail I remember is that the cover had the Godzilla and mammoth pets on the cover, I think against a dark blue or purple background, and that the author had an Asian name.

I initially marked this down as a YA novel, since I read it as a kid in elementary school, and I don't think it featured any sex, but it had a decent amount of violence, including people dying in front of the protagonist, and I think there was at least one scene where the rich girl started stripping down in front of him (to change into a wetsuit?) and it heartily embarrassing him.

story-identification novel
Share
Improve this question
asked May 13 at 16:36

This sounds very like Monster Makers, Inc. by Laurence Yep: 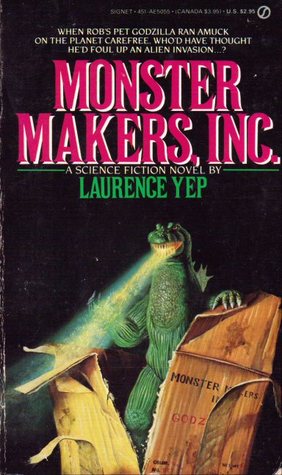 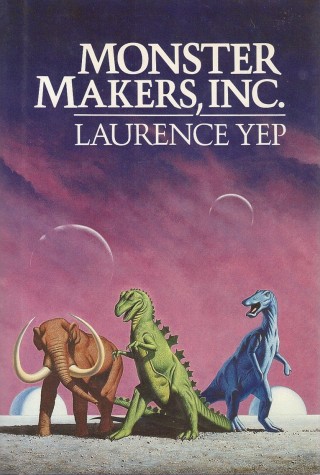 The boy is Rob and the rich girl is Shandi. The mastodon is Sheila:

People hadn’t gone for his line of prehistoric pets either. The baby ankylosaurs with their clubbed tails were hell on furniture, and the mini-mastodon, Sheila, shed all over. As a result, we just lumped them in there because they fit with the monsters.

The (giant) otter is Sam:

I had no sooner stepped outside than my legs were knocked out from underneath me and I was lying flat on my back, staring into Sam’s otter-ish old-woman’s face. A meter long, she was fifty kilos of muscle and curiosity wrapped up in ginger-colored fur. She wriggled tufted eyebrows that were ten centimeters long— almost as long as her whiskers.

The Godzilla can produce a small flame when commanded to with the keyword Tokyo:

Finally I pointed to the last one. “Tokyo, boy. Tokyo.” He paused for a moment, taking on an intense look as if he were constipated. His stomach rumbled and then he opened his mouth, exposing needle-sharp fangs. There was the sharp, pungent smell of methane vapor. And out came a column of fire that spread over the cutout so that the building disappeared in flame.

17
What novel was set in a dystopian future and featured a boy searching for his missing father?
6
Short novel about people who live in a cave and boy manages to escape
11
Book series with travel to purple grassed planets and space pets
5
YA novel: boy and girl adventure in a forest, one ends up moving away
2
Manga with a boy whose father was murdered (but is still around), living with a demon girl with magic hair
1
Kindle EBook about a boy who finds a smartphone that lets him cast spells
3
Novel involving a girl and her sister with powers (at least one over death), invited to join people with other powers