Looking for novel about unbelievable alien abductions hiding real ones

The book I'm trying to find involved unbelievable alien abductions; the kind that you'd mock them if their story appeared on TV or in a magazine. The main character (most likely a teenaged guy, although I don't remember for certain) experiences such an abduction. He probably tries to tell people about it and is promptly shot down, since his story is so unbelievable. He ends up in a meeting or support group or some other gathering of people that had similar experiences.

The similarities are that their stories are all unbelievable, but completely differ in details. The motives, appearances, methods, etc of the aliens are all different for all the people involved in the group. The only commonalities are "Aliens did it" and "No one will believe me".

The main character figures out that this is the point: aliens are genuinely abducting people and basically subjecting them to ridiculous stage plays to ensure that their stories don't add up and that no one will believe them. It's possible it's not actually aliens and is just a bizarre government coverup, but I'm pretty sure it involved real aliens.

One specific scene I remember is that the main character realizes that he has some kind of radio transmitter/tracker embedded in his ear lobe. This wasn't part of the overt abduction, and he had no idea it was in there at first. Presumably all the other abductees also had one and don't know it. After realizing this, he cuts off his ear lobe to remove the transmitter while in a public bathroom. I distinctly recall that a receptionist spots his still-bleeding ear and looks at him like he's crazy - he may have been trying to ask him/her to borrow the phone or something similar - leading to his escaping the building in haste. He was probably trying to escape the (real) aliens at this time and trying to keep a low profile, but the bleeding ear made him stand out in a crowd, even without the transmitter.

This is The Night the Heads Came by William Sleator.

There's no such thing as an alien -- at least, that's what Leo thinks until he and his friend Tim are abducted one night. When Leo comes to, Tim is gone, and no one believes his story. After Leo sees a psychiatrist and undergoes hypnosis, even he doesn't believe his story. But then memories begin to surface, and when Tim suddenly returns, Leo knows they are in otherworldly, extraterrestrial danger

Mom and Dad come bursting into the room. I don’t look at them; I’m trying to get a Band-Aid to stick to my mutilated ear. I hear Mom scream, and then she is beside me, pulling gauze and tape out of the cabinet, cleaning and bandaging my ear. “What did you do?” Dad is shouting at me. “Have you gone out of your mind?” “I... I cut out the implant,” I say, feeling a little faint now. “Implant? What are you talking about?” “The heads ... put it in, so they could control me. But I won’t let them. So ... I had to cut it out.” Then we don’t say anything, while Mom finishes with my ear. “Come on, Leo. Sit down,” she urges me when it’s all gauzed and bandaged and pulls me toward the toilet seat. I pluck the severed earlobe from the sink as I go. I slump down on the toilet. I feel steadier sitting down. 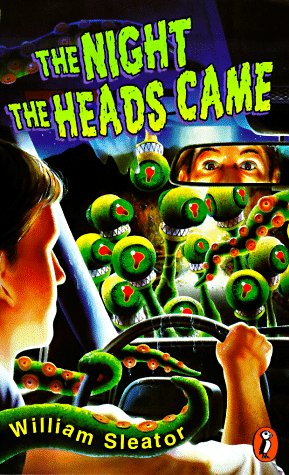 9
Looking for a sci-fi film from the 80's involving cattle mutilation
8
Looking for a novel I read about twenty years ago about a man who can change reality with his mind
7
Trying to identify novel with a man imbued with uncontrollable telepathy
10
Looking for YA SciFi book series about boy who finds out he's an alien
8
Looking for the title of a book about alien invasion, mining asteroids and using lasers to defend earth
37
Looking for novel with a girl that knows current stock prices
14
Looking for a story / novel. People speak in third person, emotions are forbidden
13
Looking for a old novel about a telepath committing murders