In 1989, a teenaged classmate showed me a book he was reading. I think the book cover showed a man in military fatigues on a green background. However, that was actually the third book in a trilogy, and my friend was interested in whether I would be interested in reading all three, so he started telling about the plot of the first book, since that would be where I would start. I never actually saw the first or second books; I decided I wasn't that interested, so he never brought them in, before he moved away a couple months later.

What I remember him telling me about the first book was that it took place in an overpopulated future dystopia, where the main character is being hunted by a female assassin. I think the idea was that overpopulation was such a problem that the authorities tended to turn a blind eye to murders. However, somehow the assassin and her target fall in love, and the target's wife is conveniently removed from the picture. (She tries to attack her cheating spouse with one of the assassin's weapons and mishandles it, leading to her own demise.)

What book series was this?

This sounds something like the 'Victim' Series by Robert Sheckley.

Starting with The 10th Victim, it was the first of a trilogy that also included 1987's Victim Prime and 1988's Hunter/Victim. 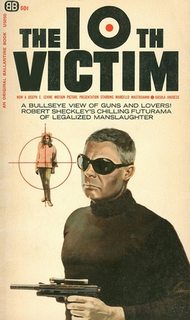 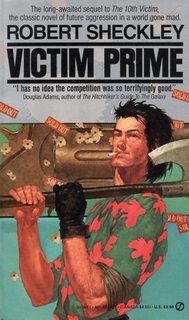 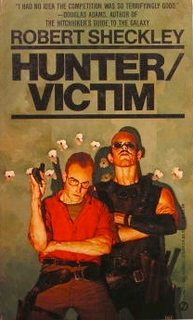 3
YA novel with a rediscovery of healing magic?
5
Fantasy novel begins with assassin being killed
16
Science fiction novel about an assassin's guild that claims to be apolitical (while doing the local tyrant's dirty work)
5
Exploding Fortune-Telling Pottery
14
Novel with a hyperspace pilot who goes to supernova party, falls in love with god who becomes a planet
8
Sci fi novel about a reptilian assassin and a hacker kid
4
Science Fiction / Fantasy book involving a young woman hired to read Tarot cards for a local lord, ends with her killing his brother for him
5
Comic book - Man inherits a property (a church?) inhabited by monsters, falls in love with a water monster