YA Series - Main character accidentally collapsed building on friend, who is thought dead

This sounds like the Mara Dyer trilogy (Mara not Maya) by Michelle Hodkin:

Mara cannot remember anything about the night her friends did. All she knows is what sheâ€™s been told: they went to an abandoned asylum, the building collapsed, and only Mara survived.

Two months later, Mara is eager to move forward with her life in a new town, but thatâ€™s easier said than done. A boy at school named Noah Shaw seems to know more about Maraâ€™s tragic past than she does. And to make matters worse, Mara is beginning to see people and things that canâ€™t possibly be there. Or can they?

When Mara goes searching for answers, she discovers a secret about herself that is most unbecoming. A secret that promises a future full of destruction, pain, love, evolution, and ultimately, retribution.

The first book, The Unbecoming of Mara Dyer, starts with Mara waking up in hospital after the building collapse that killed her friends and very nearly killed her. 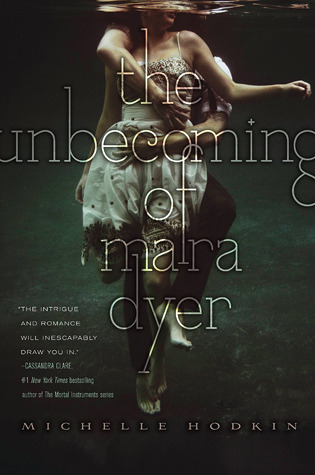 The "J" you remember is Jude Lowe, who is the bad guy. He is believed to have been killed in the building collapse as well, but his remains could not be positive identified. I don't recall his arms being found in the debris though.

The teacher who has the anaphylactic shock in the Spanish teacher Christina Morales.

Not the answer you're looking for? Browse other questions tagged story-identification young-adult powers or ask your own question.

11
Help Identifying fantasy novel about magic red jewel
7
Post-Apocalyptic / Dystopian novel - Technology is forbidden, boy discovers something and village is going to kill him so he runs
9
Movie with teenage alien girl living on Earth
3
Identify an animated childrens TV show from the 1980s about a girl sent to another planet
9
Book set in a medieval VR world where the main character goes to the physical server to play for a better connection
4
Looking for a book about out of body experiences and entering dragons minds
10
Sci-fi novel or novella where "Eliza Tertia" was one of the main characters
6
Online fiction (originally prose fiction, later had a partial webcomic adaptation) about a boy and a succubus