What's all the carrying PADDs around?

In Star Trek, people are often handed PADDs (Personal Access Display Devices) holding various bits of information and told to take them to one place or another, which seems awfully inefficient. Why is it done that way? Specifically, I know it happens a lot in Voyager. (Sometimes, people enter information into a PADD and then take it elsewhere themselves, but for the purposes of this question, that is essentially the same thing.)

They have the ability to transfer information from one computer terminal to another (I don't know how many times it's said on the bridge to "transfer the coordinates to the helm", and occasionally entire function areas are transferred between workstations), and essentially everything is connected to the same (set of) computer core(s) anyway, so how come the transfers shown as people carrying PADDs around aren't done by just tapping a few controls?

Is it only Plot Device, or is there an actual in-universe explanation that I simply fail to see?

I'm going to disagree with Stefan and offer a counter answer from the opposite perspective.

TNG's technology level when it comes to computers is similar to our own now. As is almost always the case, they under-estimated computers... Or did they? We are reaching the limits of what can be done with 2D silicon wafer chips. We've already reached the limit on individual clock speeds of processors. It will take new kinds of technologies before we can begin again with the growth of the past.

Let us assume, then, that we can't. What if quantum computers prove impossible or impractical? What if the raw computer power never gets more than 2 or 3 times better than we have now? What would our devices look like? A lot like how they are used in TNG.

Everything that can have a computer in it, will. We see this in the general modularity of components in the show. Random assortments of uni-task devices being combined to perform new tasks. Taking a phaser and some other doodads and making a force-field. Creating a tractor beam from spare parts.

Networking, wired and wireless will become adhoc and ubiquitous, transfer of data can be done seamlessly between all devices. Everything is compatible because it is all based on 200 year old standards.

PADD - the future of hand-held, ebooks and ipads: 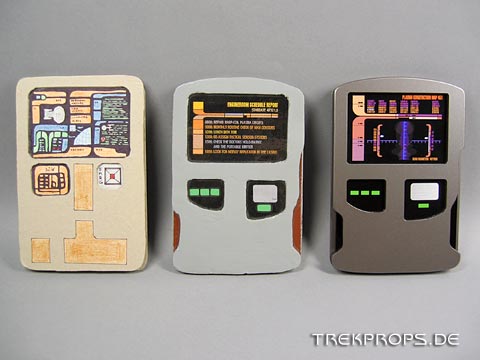 The future of laptops and desktops are a combination of the two: 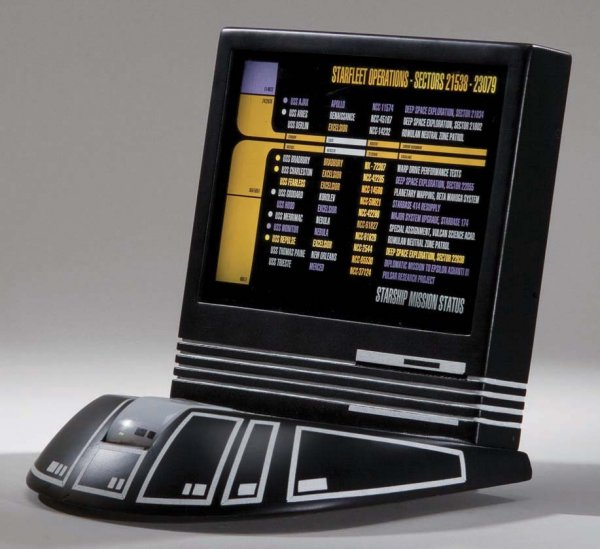 And the core computer, obviously is a mobile data-center and super-computer with huge volumes of data. Probably many petabytes or more. Where we can expect the PADD to handle a few TB and the lap/desktops to be able to hold 10-100 TB.

Reading, listening, watching can all be seamlessly transitioned between as the codecs are hundreds of years old and the ship's main core is powerful enough to do the transcribing with high accuracy, possibly on the fly.

So why carry around PADDs? Why do we carry around iPads and Laptops rather than emailing data to people? Why do we still meet in person and work in cohabitation when skype exists? Because it is communal and social to do so. The PADDs are an excuse for human contact, something it is well-known we need to function properly as an animal.

Can they just send the data over the network from terminal to terminal effortlessly? Sure, and in all high-tension moments in the show that's exactly what you see them doing. They don't run PADDs during a fire-fight. They only run PADDs when things are calm and during day-to-day interactions.

I find that completely reasonable.

It is basically a plot device to have more activity happening in scenes.

If you look at TOS and compare the technology there with what we have today then you will probably observe a dozen oddities. That is without wondering why the Captain takes his most senior and irreplacable officers into unknown and highly dangerous situations, why none of the computers have fuses to stop people being electrocuted, none of the seats have seat belts to prevent people being thrown around, why no matter how badly damaged the ship gets the artificial gravity always works (apart from once in Voyager and one of the films), people wander on and off the bridge and do not get me started on the teleporters!

If you included WiFi, a realistic command structure, military protocols, realistic physics etc the feel of the show would be drastically different. It is just meant to be a science light adventure show.

The later serieses tweaked this and introduced more science into things but they had some Star Trek traditions that required inclusion, such as teleporters, almost indestructable main characters etc.

No one could have anticipate wifi or the proliferation of wireless in this manner. On the other hand if the information is protected/encrypted and requires specific signature or biometrics to read

18
How can the holodeck in Star Trek: Generations exist around an exit?
3
What was the process by which the Augments or Genetically Enhanced Humans were made?
3
What's the point of near-warp transport?
9
In what Deep Space Nine episode did Bashir dump an armload of PADDs on Sisko's desk?
17
What's Scotty holding?
10
What's all of the space on the outer docking ring used for?
22
What the heck is Captain Styles carrying around with him?
0
What's the deal with Dr. Ailat?
12
What is that brown stuff around the planet Xahea?