Are there economic implications portrayed in comics where the buildings and cities are ruined almost daily?

This article was posted in chat. It fictionally estimates that if the final battle in Man of Steel had happened in New York City, the cost to repair would be 750 billion dollars.

Cities and buildings get destroyed almost daily in comic books. An earthquake once destroyed Gotham. Then a year or two later Lex Luthor and Bruce Wayne decided to rebuild it and suddenly the entire city was made whole. How are governments handling this? Given all the superheroes operating in the United States alone, it seems like all the cities would be ruins after the financial collapse of society and the survivors would spread out to avoid the massive destruction caused by the meta-humans / mutants.

Who pays for all the repairs?

In the late 1980s, Marvel actually attempted to address this issue (humorously) in a series called Damage Control. They depicted a specialized group of people armed with various super-technologies which made cleaning up behind such catastrophic damage (somewhat) affordable. 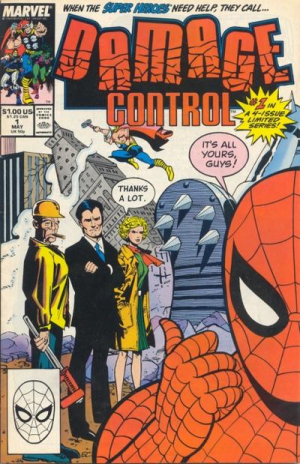 DC comics never portrayed such a team directly but there was a time when the Steelworks, a technology agency headed by the former construction worker/scientist John Henry, assisted Metropolis in repairing damage after Superman and supervillains would destroy property.

In the comic universes in general, the level of damage possibly caused by metahumans should be easily more than most governments could handle and with the number of metahuman disasters in the course of a year, without some kind of support from the metahumans themselves, this would bankrupt most governments in short order.

Damage Control employees first appear briefly in a four-page story in 1988's Marvel Age Annual and fully in 1989 in a serialized story published in the anthology comic Marvel Comics Presents #19. Subsequently, the employees of Damage Control have been the subject of three separate comic book limited series (each limited to four issues), published between 1989 and 1991, and have had frequent minor roles in many other Marvel comics including an important role in the Civil War; as well, the first issue of World War Hulk Aftersmash: Damage Control, a three-issue limited series tying in to World War Hulk, was published in January 2008.

Dwayne McDuffie, who co-created the concept with artist Ernie Colón and wrote Damage Control's initial non-adventures, pitched Damage Control to Marvel as "a sitcom within the Marvel Universe".

Since Damage Control made an appearance relatively recently during the World War Hulk stories in 2007, it is assumed they are still repairing the Marvel Universe as best they can, with a little help from the superheroes if they can catch them before they flee the scene... 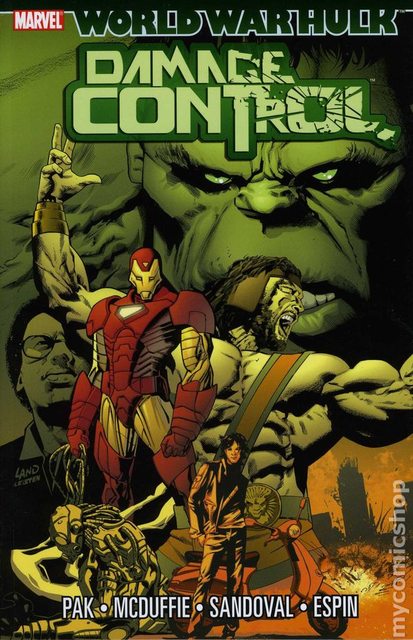 In one of the comics that was prelude to the Marvel Civil War, Tony Stark (as Tony Stark) was in a Congressional Meeting with the Sub-Committee of MetaHuman Affairs, and this question was actually addressed by one of the Senators...

Senator: Do you know, Mr. Stark, how much damage you metahumans caused in the past 50 years? 200 billion dollars in total damage. What do you say to that?

Stark: 14. That's how many times Metahumans have prevented the world from being taken over by alien races, ruled by superpowered tyrants, or nuked back to the Stone Age. The Defense budget last year alone was 600 billion dollars. 4 billion dollars a year? I'd say we're getting off cheap.

Of course this can't actually be true. But it's pure Tony Stark. And you got to admire the guy.

I think you have to realize that with all the fancy technology and inventions present in the comic universe, economics are very different from our world.

I admit with real world economics in such a mess its hard to read a comic without thinking "who the hell pays for all of this?"

In the end you kinda have to put this into the back of your mind and think in that universe money is not the most important problem.

10
Can the Flash be held liable for Flash-related property damage?

3
How many on-going Batman comics are there, and how are they interlinked?
7
Since the 'New 52' reboot, are there any characters in DC comics that are not neurotypical such it could be considered a handicap (ie, not eidetic)?
3
Are there any references to 'Excalibur' comics in Thor: The Dark World?
8
Are there any comics where Superman is influenced by several types of Kryptonite in the same time?
11
Are Skye and her Father based on characters from the comics?
7
Are there any Asian superheroes in the Marvel comics who have ever had their own solo series, as of 2016?
4
In the Comics are Thor and Hulk evenly matched?
8
Are there recent depictions of Al Qaeda and/or ISIS as villains in Marvel Comics (non-movies)?
3
What elements in the movie Steel are from the comics and were any later added to the comics?