Who is the eponymous Jedi in Return of the Jedi?

I had always assumed the Jedi in the title of Return of the Jedi referred to Luke Skywalker's return from defeat. But Jedi is its own plural -- could it be referring to the rebuilding of the organization/movement/religion that presumably occurs after the Empire is defeated? Or maybe even to the return of Anakin's good side?

Yes, the title was originally Revenge of the Jedi, but that doesn't make it much clearer. It could still be either Luke's revenge, or the Jedi's revenge over the Sith, or even something else.

Did Lucas ever say exactly what it was he intended?

This is the crucial moment when Luke fully claims his heritage and asserts his Jedihood.

Before that, Jedi didn't exist anymore. The few remaining after Order 66 were in hiding or had died since (Obi-Wan Kenobi, Yoda).
But with Luke's claim, and through his and his father's actions, the Jedi as a concept, as a factor of importance in the world, has returned. Comparable with "Return of the Light".

The caption of the picture in the official Luke Skywalker bio on Starwars.com, showing Luke with his friends the Battle of Endor, underlines this:

Returning to his friends, Luke saw a trio of Force spirits -- Obi-Wan, Yoda and Anakin, redeemed by his sacrifice. Luke's love for his father had saved the galaxy, and brought about a chance to restore the Republic and the Jedi Order.

According to the official Starwars.com biography of Luke Skywalker, the film "Return of the Jedi" ends with the return of Anakin Skywalker.

It follows that the 'Jedi' mentioned in the title is Anakin rather than Luke or "The Jedi Order". 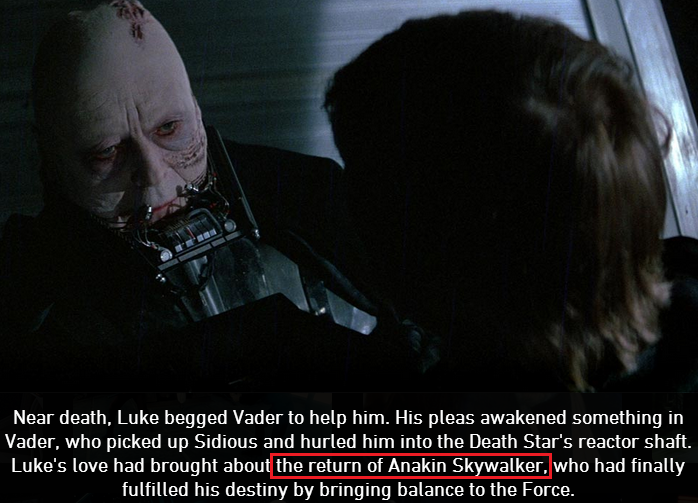 I thought about that too, a long time ago in a town far away.

However, who knew Lucas at that time was to continue the Saga and subsequently stories and Paths change, so the title may be null if we find soon enough in part 7 that the Sith are lurking somewhere in the Galaxy.

Late answer to this thread, but I just came across Star Wars Trilogy: The Original Soundtrack Anthology box set which was released in 1993; meaning it is pre-“Special Edition” so some of the track titles and names allude to a universe that was not fully “expanded” in the post 1997 world. 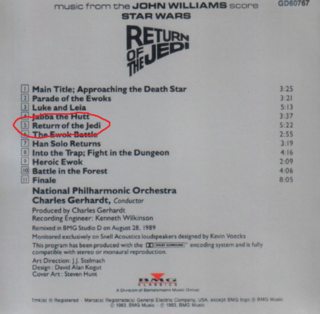 Specific to this question, on disc 3—which contains tracks from Return of the Jedi—track 5 on that disc is actually named “Return of the Jedi” which is basically the musical cues specific to the scene in the film where Luke is about to “walk the plank” into the Sarlacc pit and then pulls a fast one—with the aid of R2-D2—and does some force-related moves including fending off Jabba’s flunkies with his lightsaber.

Which is all to say that at least at the time the film titled Return of the Jedi was released in 1983, the “Jedi” that had “returned” was embodied by Luke.

In The Empire Strikes Back (1980) he was “Not a Jedi yet…” and loses his hand—and almost loses his life—because of it. And at the beginning of the film Return of the Jedi, Luke has a new lightsaber and knows how to use it. In fact that rescue from Jabba the Hutt was the very first time anyone actually saw a Jedi do anything heroic in the classic, swashbuckling “I’m saving someone’s life…” sense and not in the sense of having endless duels with Darths and other members of the Sith.

So if you ask me, Luke’s training to become a Jedi was solid at the beginning of Return of the Jedi, but the ending was his true test… It’s not like—if in some parallel universe this happened—that Luke might have been turned to the dark side and was never a Jedi to begin with. Nope. He was a Jedi at the beginning of the film, but his confrontation with Vader and the Emperor at the end only reinforced it.

According to the epilogue of the now-noncanonical book The Rise and Fall of Darth Vader, the title refers - at least in part - to Anakin Skywalker.

Night had fallen by the time Luke placed Anakin Skywalker's armor-clad body atop a pile of gathered wood. As he ignited the pyre, Luke said, "I burn his armor and with it the name of Darth Vader. May the name of Anakin Skywalker be a light that guides the Jedi for generations to come."

Luke was unaware of the spirits who watched him from the shadows of the lambent woods. But later, when he rejoined his allies for their victory celebration in the treetop village that was home to the Ewoks, Luke saw three shimmering apparitions materialize in the darkness. They were Obi-Wan Kenobi, Yoda... and his father, Anakin Skywalker.

The Jedi had returned.

Return of the Jedi, not a Jedi.

"The migration of the salmon" refers to all the Salmon migrating, not one.

It's the Return of the Jedi, as an organization.

Return of the Jedi refers to the return of Anakin Skywalker as previously stated above. This answer is to add up to Richard's answer. By using the term THE Jedi tries to focus on a specific Jedi Master (similar to THE ONE, or THE BEST or something like that). It a slur/slang in English and as we all know using it helps defining someone as the best in their field. "He is not a farmer, he is THE farmer".

So using the term THE instead of A in the title refers to THE Jedi which in fact is indeed Anakin Skywalker. The person who was born of a virgin mother, born directly from the force itself. He is THE JEDI.

I really think Return of the Jedi was about Anakin, when he yelled no I think his no was being converted to the dark side. Not converting Luke to it either.

Not the answer you're looking for? Browse other questions tagged star-wars return-of-the-jedi title-explanation or ask your own question.

1
What does the title "Return of the Jedi" refer to?
112
Is Luke Skywalker actually a Jedi?

9
SW prequel Yoda: "Attachment leads to jealousy, the shadow of greed, that is". What does this line mean?
5
How does the Prophecy of the Chosen One relate to the EU?
11
Is the title "Dark Lord of the Sith" reserved for the Sith Master?
24
How did Grand Moff Tarkin Feel About Darth Sidious?
71
Was Luke in “Return of the Jedi” really “better” than Obi Wan in “Revenge of the Sith?”
4
Who wrote the songs for the special edition of Return of the Jedi?
4
Who designed the Emperor's chair from "Return of the Jedi"?
13
Does the phrase "Return of the XXX" actually predate Return of the Jedi and Return of the King in common usage?