What happens to Talia's truck driver in Batman - The Dark Knight Rises?

At the climax of The Dark Knight Rises:

Talia is in a truck that carries the bomb, Batman is in the Bat, Selina Kyle is driving the Batpod, and there's a couple of tumbler-tanks around there. Batman is trying to lead the truck to where Lucius Fox is, to put the bomb back in place and disengage it. Thalia stubbornly refuses to let them do so.

There's a lot of gunfire coming from the bat. Talia tells the truck driver, next to her, to stay put. More gunfire and explosions everywhere, then something happens to the driver and Talia takes the wheel but the truck falls down on a bridge. When Gordon checks the cockpit Talia is there, but there's no trace of the driver.

We know that Batman (who doesn't seem to like fire-arms except for those present in all his vehicles) doesn't kill (Nolan's Batman explicitly did and said so in the two previous movies of the saga).

Could somebody clarify what happens to the truck driver during those scenes?

Either that, or he became one with the force (TVTropes).

The film's screenplay indicates that he died, a victim of Batman's gunfire.

Interestingly, the film's novelisation disagrees somewhat, attributing his death to a random piece of concrete flicked into the cab (by a bullet or a rocket)

The Bat came in for another run. It blasted the road in front of them, forcing the truck to veer right at an intersection. Smoke and flames burst from the flying debris. Against all odds, a random chunk of concrete smashed through the driver’s side window, striking the man in the head. He jerked, then slumped forward onto the wheel, blood leaking from a fractured skull.

Either way, his body was "shoved aside" when Talia took over driving, presumably it's just pushed back into the rear seats (out of sight) when the truck crashes.

The truck careened out of control.

Talia shoved the man’s body aside and took hold of the wheel. She steered the truck back into the center of the lane. Out of the corner of her eye, she glimpsed the Bat banking off into the sky, no doubt preparing for another assault.

He perishes after a missile launched from the Bat explodes in front of the truck (yes Batman kills him, indirectly if you will)

He is then tossed aside by Thalia so that she may regain control of the vehicle but never gets kicked out from the truck until later when it crashes. The door opens and the guy's corpse gets ejected. 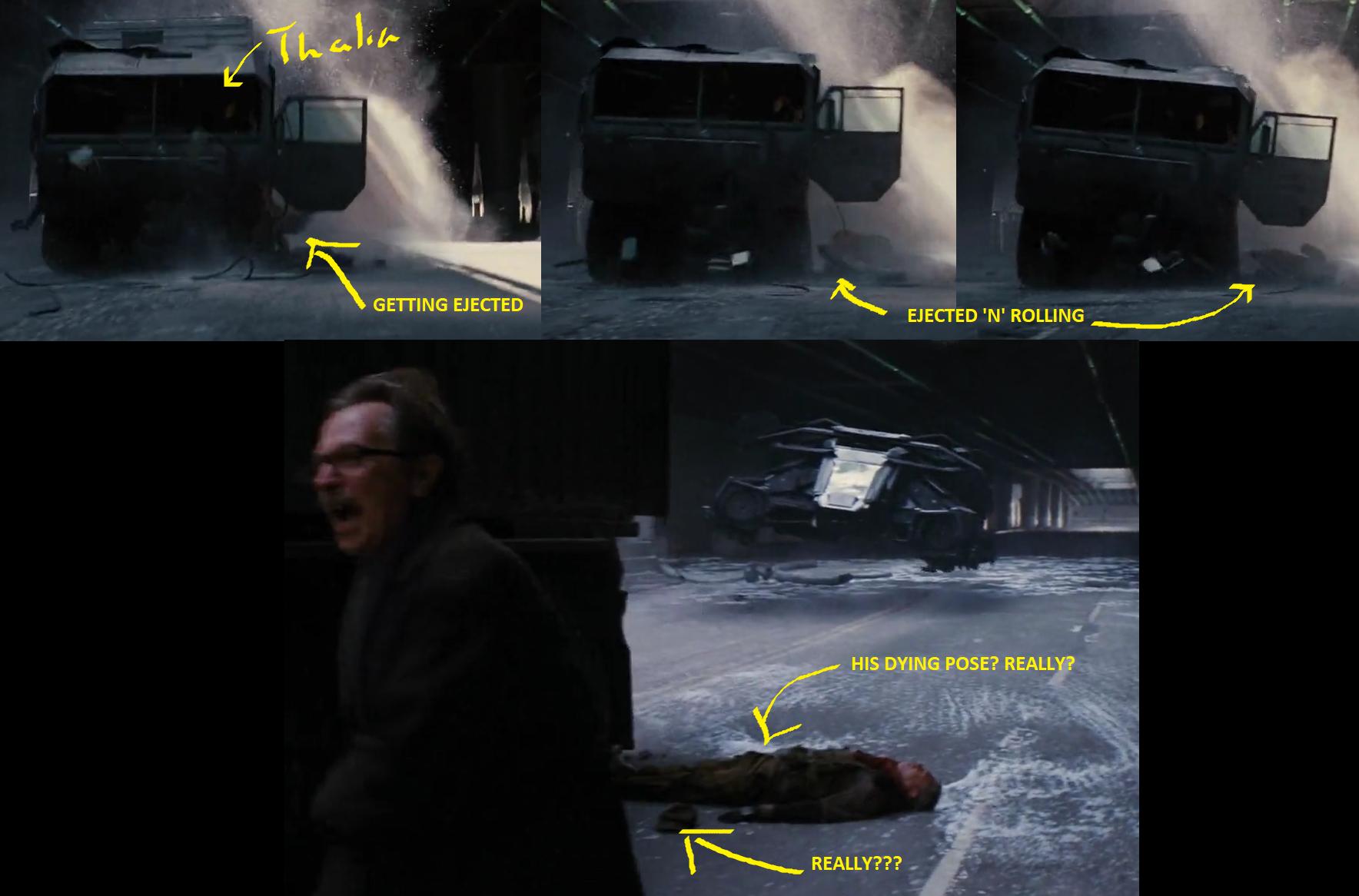 I know it's a common trope that the bad guy always gets rid off his fallen goons' corpses, showing their lack of empathy and camaraderie that the protagonists always have, but it didn't happen in this scenario which is good and consistent to how these League of Shadow members were portrayed treating each other during the movie ("brother", "friend", etc)

I actually thought that from the missiles fired at them made something on the inside explode thus killing the driver. Also you can sort of see the body flying out of the truck when it falls off the ramp for a split second.

The driver is clearly struck by a stray round from the Bat. Assuming the weapon is a large caliber (.50 cal or 20mm), it is unlikely he could survive an impact from such a round. They are very powerful and leave a very large wound. Also, when the truck hits the lower street after falling off the overpass, the driver can be seen falling out of the cab and ending up close to the rear wheels, possibly getting run over. When Gordon climbs out of the back he looks down at the driver. So, Batman did kill him, but at the very least, it was not truly intentional, but Batman was trying to stop that truck, and the driver dying was collateral damage.