I'm searching for a book series (Sci-fi/fantasy) that could be from the 90's or later that I read a few years back, all I remember is the plot from the first book:

Two worlds - one based in technology and the other in magic send out expeditions to other worlds via portals to survey them for resources. The two teams meet up and the tech world team kills the magic world team, leaving only one survivor - a woman with psychic like abilities. A war between the two worlds develop, spanning the multiverse. If anyone knows the title/author, would appreciate a reply.

This sounds like Hell's Gate by David Weber and Linda Evans, even though it's from 2006. From Wikipedia:

Sharona and Arcana are worlds in the multiverse which hold human civilizations. Both have discovered portals, which allow one to pass from one Earth to another, parallel Earth, which is almost always similar but uninhabited by sentient beings. Chains of universes linked by portals are called transit chains. Most universes have just one portal, or two; a few have three, and both civilizations have only found one with four.

And here's how the story begins with a bit more info than you can gleam from the jacket:

[...]The story begins with a Sharonan company's survey crew exploring a new universe, which they discover contains eight portals in close proximity. One of the members of the crew goes to hunt by himself, and has a surprise encounter with an Arcanan, also from a survey crew exploring the universe (although his crew is part of a governmental military organization). Each one is afraid that the other will shoot, so they raise their weapons, and then one panics and fires (who fired first was never made clear). The Sharonian managed to stagger back to his crew and warn them before expiring; they immediately began to move back toward the portal they had come from.

Right now, there's only a one more novel in the series – Hell Hath No Fury – but there might be a third book incoming in 2016.

Here's the cover for your viewing pleasure: 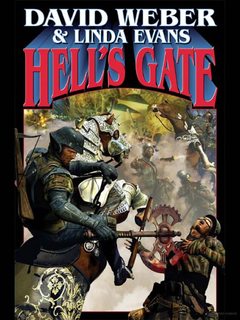 I think I read this exact book as well! I was looking for it too, and I found it through Reddit thanks to this page. It's called InterWorld. 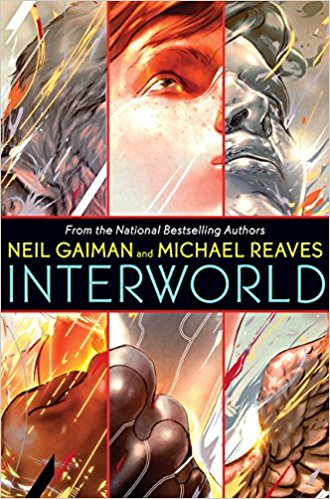 Here's the Wikipedia page for the book.

18
Can anyone identify this 90s teen-fantasy series, gems in backbone, big magic, evil king?
9
90s fantasy book: man can access a parallel medieval world while 'dreaming'
11
Fantasy novel, magic sword and different worlds
5
Story ID from an in-text poem about dragons
5
90s sci-fi novel with two worlds, one grim another pastoral with the war-cry “Ire, Iron and 'voorstrod'”
14
Old SF book where aliens manipulate Earth to keep us at war?
5
LitRPG book with the main character “trapped” in VR MMO world, manages to re-invent tobacco as a crafting recipe, serves a “dark” god