What early Teen Titans comic had a witchcraft story on an isolated island?

I had this comic in the 70's, which featured the Teen Titans. It was a really spooky one as it was set on a cut-off island. I think there was a mansion belonging to one of the female superhero's relative, an aunt possibly. The story’s theme was Witchcraft.

There was a cat that got garrotted, a gold star that had to be fired up to the sun and some wild demonic dogs. I think perhaps the aunt may have been possessed by the spirit of a dead witch, and the life of the female Teen Titan was at stake as she would be the next to be possessed. 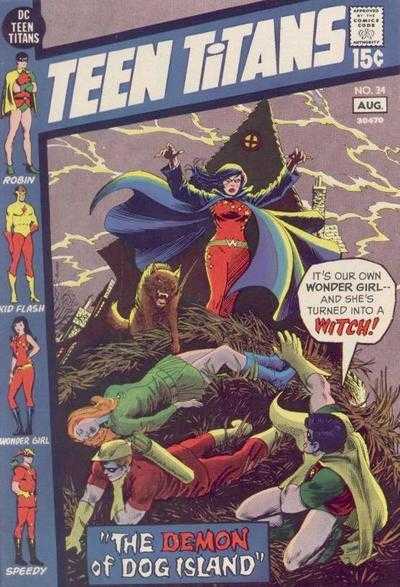 It was a really spooky one as it was set on a cut-off island. I think there was a mansion belonging to one of the female superhero's relative, an aunt possibly.
On Dog Island, Donna Troy runs from Jed Jukes, and a pack of dogs. Troy seeks sanctuary in the old Wickersham Estate. Troy reads to the elderly widow, Miss Wickersham. Jukes, and his dogs, prowl about the grounds of the estate. Acting on one of Lilith Clay's precognitive visions, the Teen Titans drive out to Dog Island.

There was a cat that got garrotted...
The male Teen Titans are awoken by the death scream of Wickersham's cat. The Teen Titans find the cat, strangled to death...Upon returning to the Wickersham Estate, Clay finds Troy sleeping. In Troy's hand is a small device, which was used to strangle the cat. Clay accuses Troy of being demonically possessed.

wild demonic dogs
Jed Jukes commands his dogs to attack. Astonishingly, they turn on Jukes, and begin rending him to shreds, with their teeth and claws...The Jukes' dogs are really Drachwyck's unholy followers, transformed into canine form, to survive the passing of the centuries.

I think perhaps the aunt may have been possessed by the spirit of a dead witch, and the life of the female Teen Titan was at stake as she would be the next to be possessed.
The Teen Titan's find Jukes strung up, upside down, in the basement. Troy enters the room, and strikes out at her teammates, with a powerful mystic force. The Teen Titans begin writhing uncontrollably. The spectral figure, from the dunes, rescues Clay's life. Professing his love for Wickersham, the ghostly guardian instills a coma-ike condition upon her. Robin breaks a window, letting in the rays of the rising sun. Troy comes out of her trance, ending the mystic assault on the Teen Titans. Again, Troy has no memory of her nocturnal activities. Upon discovering Wickersham's condition, Troy becomes extremely distressed. Clay reveals that Wickersham is a witch. Three centuries ago, Wickersham was known as Magda Drachwyck.
On her wedding day, she was possessed by an aging demoness, and compelled to slay her would-be husband, Gregori. Upon the demoness' death, Drachwyck took her place among her coven. Forced to flee the country, Drachwyck had her house brought to, and rebuilt on, Dog Island. ...Now, Wickersham lays near death. Should she die while Troy is still under her spell, the demoness possessing Drachwyck will transfer to Troy.

A gold star that had to be fired up to the sun
Clay finds a star spangle, from Troy's Wonder Girl costume in Wickersham's locket. With Wickersham's death only seconds away, Speedy fires the spangle into the sea, breaking the spell.

Not the answer you're looking for? Browse other questions tagged story-identification comics teen-titans or ask your own question.

11
What story had paper clips grow up to be coat hangers?
3
What is the back-story of “Sister Claire” comic?
8
Comic story early 80s with a giant blowing head
8
What was that story about teen cousins who get mental powers from polluted water?
18
What comic book story is referred to in the Infinity War trailer “the click of his fingers”?
5
What is this story referenced in Slay the Spire; “a giant isolated building underground…outside conditions have become unbearable”?
10
What short story book had “story for telepaths”?