Who is this giant spider creature?

Who is this giant spider creature?

I don't want to call him a villain as he's in a picture with Justice League Dark and could very well be a temporary member or ally. 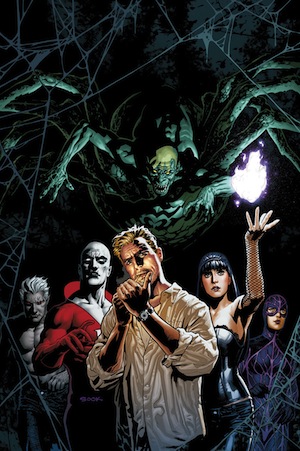 The spider-creature on the cover of Justice League Dark #9 doesn't actually appear in the issue. The creature is probably meant to represent the overall threat of the issue, which are a variety of demonic creatures summoned by Felix Faust throughout the issue. Also, at one point near the end, JLD member Doctor Mist finds himself stuck in a giant spider web and must be freed by the others. However, whatever horror made the web is never shown.

We later find out that

Doctor Mist is actually a mole working FOR Felix Faust. Given this fact, it's entirely possible that Doctor Mist created the web himself and no actual spider creature existed.

207
Whose underwear is this?
9
Who are these DC villians from Justice League: Crisis on Two Earths?
7
Was the villain of Justice League Dark based on a Sandman villain?
3
Who is this female character near Aquaman, painted by Stjepan Sejic?
3
Is this Young Justice character supposed to be Black Spider?
2
In the Justice League episode “A Knight of Shadows”, who was Mordred thinking about?
7
Who is the Umpire in this picture?
1
Who is this character and what are her powers?
9
Looking for a Spider-Man comic from the 1970s where a telepathic man-child controls a town, is defeated when Spidey “deafens” him?