Is Skye's mother based on a character from the comics?

As it says in the title:

Is Skye's mother based on a character from the comics?

Her father, Cal, has been confirmed to be Mister Hyde, is her mother based on another comic character?

Related Question: Are Skye and her Father based on characters from the comics?

The character appears to be an original creation for the TV show. However, she may be a nod to little-known character Yi Yang of Earth-616. 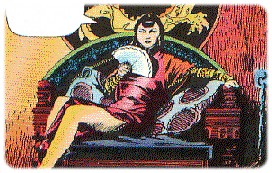 Yi Yang shares both the ethnicity AND the powers of Jiaying, as well as having a similar name. Like Daisy Johnson, Yi Yang was not an Inhuman in the comics but instead gained her abilities as the result of a chemical formula. In the case of Yi Yang, however, the character is not related to S.H.I.E.L.D. in any way, nor is she related to any of the other characters seen in the show. Still, she may be the inspiration for the character if nothing else.

Little is known about Yang - she claims to be over a thousand years old and has an advanced healing factor which is equal to (or even better than) that of Wolverine. Her claimed age may be an exaggeration, but she has been active - and has not visibly aged - since at least 1930. Throughout that time, she has run her own crime syndicate and was last seen as a member of the villainous Unkillables, which is a D-list team comprised of villains with healing factors or similar abilities that make them difficult to kill.

At the very least, this would definitely fit with AoS' motif of using little-known D-list characters.

Skye's mother is named Jiaying, and there is no Inhuman by that name in the comics. In addition, her power in the series appears to be longevity, and possibly even immortality (given what she has survived thus far).

In the comics, all Inhumans are long-lived, though not immortal, and I haven't found one that has the near-Wolverine-level regenerative power that Jiaying seems to be showing.

On a side-note, this is the main source of deviation between the Calvin Zabo/Daisy Johnson comic origin story and the Agents of SHIELD one. In the source comics, Daisy is not Inhuman, and her mother was just some random prostitute that Zabo impregnated. Daisy's Quake powers in the comics derive entirely from her father's experiments on himself.

11
Are Skye and her Father based on characters from the comics?

2
Has Skye become Kree?
7
How do these different accounts of Skye's backstory fit together?
9
Why can't Jessica Jones fly?
7
Who's the child and her mother that can “talk to flowers” in Ruins?
4
Are any of the other mutant characters in Legion based on comic characters?
13
Is Captain Marvel as strong in the comics as Kevin Feige suggests she will be in the MCU?
1
Is 3000 a reference to Iron Man in the comics?
5
How does Mantis differ between the movies and comics?