Were Darth Vader duplicates ever used by the Empire or Rebels?

Did Empire ever use Darth Vader duplicates to do its tasks? Mere Vader's presence could have made a job done thanks to his terror personality. In case Vader was not available, it could be useful.

Or, did Rebels ever try that? Well, using Vader duplicates, big things could be accomplished like gathering intel etc.

star-wars star-wars-legends
Share
Improve this question
asked May 2 '15 at 7:49

Unknown. Certainly none are seen on screen in any of the theatrical films, novelisations, TV Series or canon comics. It's theoretically possible (cloning and holographic technology are definitely a 'thing' and his outfit should be pretty easy to replicate) but there's no indication that the rebellion or the Empire ever tried it.

Yes, kinda. There was a Vader clone seen in "Galaxy of Fear : Clones", a young-reader novel. I won't spoil the plot but as you can see from the book cover, the real Vader doesn't take kindly to finding out. 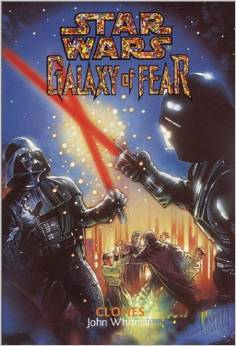 47
What exactly did Darth Vader leave unfinished that Kylo Ren intended to finish?
31
What was Darth Vader's official role (or rank) in the Empire?
13
Is It Possible To Impersonate Another Person Within The Force?
27
Did the 501st Legion know what Anakin had become when they attacked the Jedi Temple with him?
22
Why didn't Darth Vader tell Sidious that Obi-Wan disappeared instead of dying?
50
How did Kendal “as clumsy as he is stupid” Ozzel attain the rank of admiral?
47
Is there an in-universe explanation given to the senior Imperial Navy Officers as to why Darth Vader serves Emperor Palpatine?