Can Mjolnir “stick” to anything? [duplicate]

Ask Question
Asked 5 years, 11 months ago
Active 4 years, 1 month ago
Viewed 897 times
5
This question already has answers here:
How was Loki not crushed by Mjolnir? (3 answers)
Closed 4 years ago.

It's established within the MCU that Mjolnir can sit on a shelf in the helicarrier and can be lifted by an elevator. (Someone else can edit this question to include references, if they like.) And obviously it can stick to the ground. Plus, it is used to pin Loki without crushing him. So it has the incredible power to "freeze" itself (for lack of a better term) to various objects and vehicles (elevator, helicarrier, planet). It other words, it can stick to anything that is stationary in some normal frame of reference for people.

Can Thor stick it to objects that we don't normally think of as a frame of reference, or in a non-vertical orientation? For example, could he stick it to a baseball bat? A flagpole? The ceiling? Hulk? If not, when does something stop being horizontal? When does the floor stop being the floor and start being a wall or a pile of rubble?

Mjolnir can't be lifted, or by extension moved, by an unworthy person. But beyond that restriction (and its ability to fly when summoned, etc), the hammer acts like any other hunk of metal. Touch it to the ceiling and let go, and it will simply fall. Put it on a glass table and then shatter the table, and it will fall. Put it on the end of a baseball bat and you'll drop the bat, because you are unable to lift Mjolnir, but upon dropping the bat, the hammer will simply fall.

We've seen the hammer behave normally, according to physics, when it interacts with outside forces. (For example, its path is altered when it impacts particularly heavy/dense/tough objects or people, and it "fell" into a resting position when Thor hung it on a coat rack in Thor: The Dark World.)

Remember the language of Odin's spell:

The hammer isn't magically fixed to a given object, it's magically unwieldable/unholdable. If you try to pick it up, you simply can't. If it's sitting on your chest, you can't sit up. The spell is reacting to you and your worthiness, preventing you from lifting or moving it, not altering how the hammer behaves on its own.

When you put it in an elevator and the elevator moves, there's nothing magical about it. It's the same thing that's happening if you put an office chair in that same elevator: the object moves because the elevator is moving.

Mjolnir doesn't actually "stick" to anything, at least not in the sense you seem to be implying.

What happens is, once Thor has let go of the hammer, no one else can move it from that spot, because they would effectively be "wielding" it. When not being carried by a person, the hammer behaves much like any other object in terms of obeying the law of gravity. (That excludes, for obvious reasons, those times when Thor is actively pulling the hammer towards himself.)

For example, if Thor pressed the hammer against a wall and let it go, it would drop to the floor. If that floor happened to be, say, on the helicarrier, the plane could still change altitude, and the hammer would stay on the floor as it went up and down. This concept is very briefly, albeit jokingly, mentioned at the end of Age of Ultron -- if the hammer were in an elevator, the elevator could move up and down with the hammer inside it.

However, if Thor were to place the hammer on top of a person, pinning them to the ground, that person could not push the hammer off of them. They couldn't do anything that would require the hammer to move at all. They could probably drag themselves out from under if, as long as the hammer itself remained stationary. If they did so, the hammer would just fall to the ground.

Note, however, that Mjolnir is also a war hammer, and thus is naturally very heavy. It's not clear just how heavy it is, since Thor's ability to lift it is magically enhanced, but according to one prominent physicist: 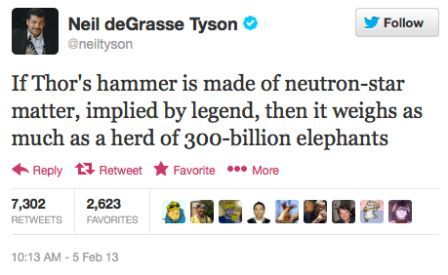 If you were to put it on a shelf, it would have a sizable amount of inertia keeping it in place, like any heavy object. If it were on a boat or plane that could tilt dramatically enough, it might slide off, but we've never really seen it sitting around anywhere for very long to know what that threshold is.

In another answer you bring up the idea of Mjolnir in space. In fact, there have been cases where people were able to move Mjolnir around in space, but once the hammer came close to Earth, gravity took over.

Can Thor's hammer be wielded by anyone in outer space?

However, I suspect those rules don't apply in the MCU. Those examples largely rely on the idea that Mjolnir is "too heavy" to wield on Earth; in the MCU, that's not precisely the case: it's impossible for anyone, no matter how strong, to "wield" it if they're unworthy. This has obviously never happened in the MCU, so we just don't know.

Not the answer you're looking for? Browse other questions tagged marvel-cinematic-universe marvel avengers avengers-age-of-ultron mjolnir or ask your own question.

25
How was Loki not crushed by Mjolnir?
1
In the Thor movies, why can only Thor lift his hammer?
54
Can Thor's hammer be wielded by anyone in outer space?
8
Why can't this truck lift Mjolnir but a Helicarrier can?

53
How does Mjolnir determine 'worth'?
5
Would Mjolnir, if loose in Hulk's cage, move?
90
Why isn't Captain America worthy of Mjolnir?
12
Can an inanimate thing lift Mjolnir?
9
Can Iron Man's robots (or JARVIS) lift Mjolnir?
11
Do the shards of Mjolnir have the same enchantment as Mjolnir?