In what order should I watch The Thing movies?

I understand that the 2011 version of The Thing is a prequel to the 1982, and would come before the original in the movie universe chronology.

However, I was wondering if it's necessary to watch the original first, in order to "get" all the possible references in the prequel. Are there elements of the prequel that clearly make more sense in the context of the events of the first movie?

There is obviously no canonical reason to watch the movies in any particular order, but for a number of reasons, I would suggest watching them in the order in which they were released.

Perhaps more important than any of the above, the simple fact is that most fans of The Thing (1982) would probably argue that you don't really need to see the prequel at all, whereas they would unanimously insist that you absolutely should see the earlier film. Among the fanbase, the prequel is seen as an optional addition to the real deal.

In short, I would recommend that you see The Thing (1982) as soon as possible, and if you decide to watch the prequel, do so afterwards. I consider the prequel to be neither necessary nor a particularly good movie, especially as an addition to the franchise. If it were a standalone film, the prequel would be so-so, but as a Thing movie, it is regrettable.

As it happens, Carpenter agrees with me on this point. He has been largely quiet about the prequel, but he hints that he didn't approve of the idea and has no interest in it. He said that the best "The Thing Two" story is the Dark Horse Comic book miniseries, and he also likes the short story by Peter Watts, The Things. The Dark Horse series was called The Thing From Another World (the full title of the 1951 film) in order to avoid legal conflicts with Marvel Comics related to their Fantastic Four character, The Thing.

Q. If you had made a sequel to The Thing back in the mid to late 80's, where would you have set it? In a city? Some other isolated location? Would you have even bothered had the opportunity arose for you to take up the helm and expand on the mythology? More over, what things do you think would be cool or interesting to add to the creature? Do you think adding to the list of peculiar things it could, would, and would not do would make for a more interesting alien/monster, or are you more for the mystery and leaving it ambiguous?

A. The best THE THING 2 story, I believe, was in the Dark Horse limited series comic book published in the 80's. It began with MacReady and Childs walking over the icy landscape....
- Outpost 31 Interview with John Carpenter 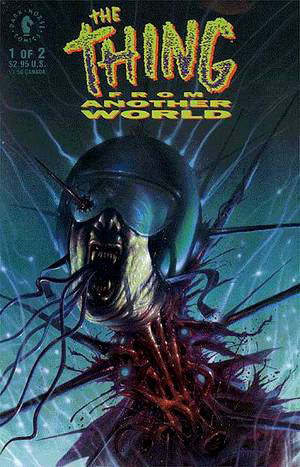 Personally, I would say that a list of the relevant materials, in order of importance and potential enjoyment, would be as follows:

This is also probably the order in which I would recommend reading/watching them.

It's not a scientific test, but I watched the Things in chronological order, and it wasn't the worst thing ever. The scene(s) exploring the Norwegian base were pretty early in the 1982 movie, and it was great to exclaim "So that's why they focused on the axe in the wall!" and whatnot. And, since the earlier movie was better, it finished strong, leaving a better overall impression of the franchise.

6
Liaden reading order
70
What is the recommended viewing order for young first-timers to watch Star Trek TV episodes and movies?
2
What are the sequels/prequels to X-Wing book series?
3
Should I read R.I.P.D. "City of the Damned" comic before or after watching the movie? the original comic?
8
What order should I read the Patternist/Patternmaster series in?
8
Which order should I read the Humble Bundle IDW Star Trek comics in?
37
In the 1982 movie, "The Thing", why do they have flame-throwers?
10
Radio operator's throat in The Thing (1982) and The Thing (2011)
10
Was The Thing the pilot or a passenger on the space ship?
5
How did the dog-Thing know where to run when it fled the Norwegian base?