Is this Star Trek's most used background prop?

Whenever the story brings us to a lab, science outpost, or somesuch, I immediately start looking for these: 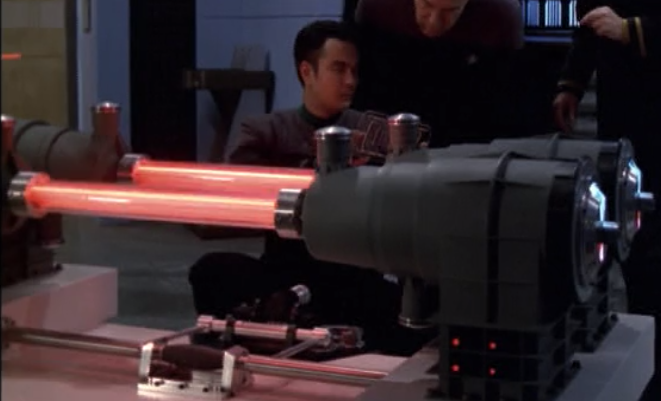 I'd have to say yes. The tubes (described in the script notes as...

... Dual generators with rotating neon lights inside an acrylic tube; light-controlled panel with knobs and buttons ...

...appear in at least 10 TV episodes as well as in the ST movies including Star Trek II, Star Trek V, TNG, Voyager and Enterprise (but not DS9, for some reason).

Second place would seem to go to the "Oscillation Overthruster" seen in TNG, DS9 and Voyager masquerading as various scanners and machine parts. 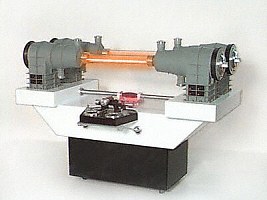 The prop was not custom-made in the Star Trek Art Department, but it is available from a company called Modern Props. It was originally built for the original Incredible Hulk TV series, according to Modern Props founder John Zabrucky. The prop is described as "dual generators with rotating neon lights inside an acrylic tube; light-controlled panel with knobs and buttons." The tubes appear in other science fiction series and movies as well, such as "Airplane II" (with William Shatner), "V" (the 1983 miniseries), "The Last Starfighter" (1984) or "Austin Powers: The Spy Who Shagged Me".

Though the website for Modern Props is apparently defunct, Ex-Astris-Scientia did share the rental company's image of the prop from their catalog (above), along with numerous screen shots of it's appearance in TV and movies.

Not the answer you're looking for? Browse other questions tagged star-trek star-trek-tng star-trek-voyager props or ask your own question.

55
What is "the prop" used in many Sci-Fi movies?
126
What was the origin of Star Trek's Borg?
6
What is the (current) fate of the model(s) of the Reliant used in the filming of Star Trek II?
32
What political system does Star Trek's Federation operate under?
23
Was the original Death Star prop actually blown up for the movie?
3
Do Star Trek's Bussard collectors conflict with the deflectors?
21
Which ship has the most prolific "recurring" role in Star Trek?
15
What happened to the prop ships and monoliths used in 2001: A Space Odyssey?
1
What is the song used in this Star Trek: TNG special feature?
19
Are there any designs for Sulu's rising targeting scanner prop from Star Trek: The Original Series?