Which city in the DC Universe has the highest crime rate?

While writing my comment on @Thunderforge's question, I began to wonder about the other cities in the DC Universe.

ComicVine did a Poll, but only 27 people participated and Gotham City "won" followed by Blüdhaven. But that is argueably just fans giving an opinion (and not very many at that).

Obviously, crime is diverse, so while Gotham may have a whole plethora of total nutjobs, the murder rate might actually be quite low, or while Superman manages to catch every bank robber in Metropolis he might have much more trouble with a serial killer, so the Metropolis murder rate could be much higher.

Has there ever been anything official - maybe somebody reported the newest crime statistic to President Luthor or something of that sort - in any of the comics or supplementary material about the most crime ridden city in the DC Universe?

PS: While this question is about the DC Comic Universe, mostly because it has the largest amount of source material which increases the chance for there being an answer, any other incarnation of the DC Universe is equally welcome. There may after all be a quote from a TV show or movie (live action or animated) or game stating that city X has the highest crime rate...

According to Smallville: Season 11 - Guardian #09, Star City has the second highest crime rate in the US, with Gotham a clear and firm leader as the highest. 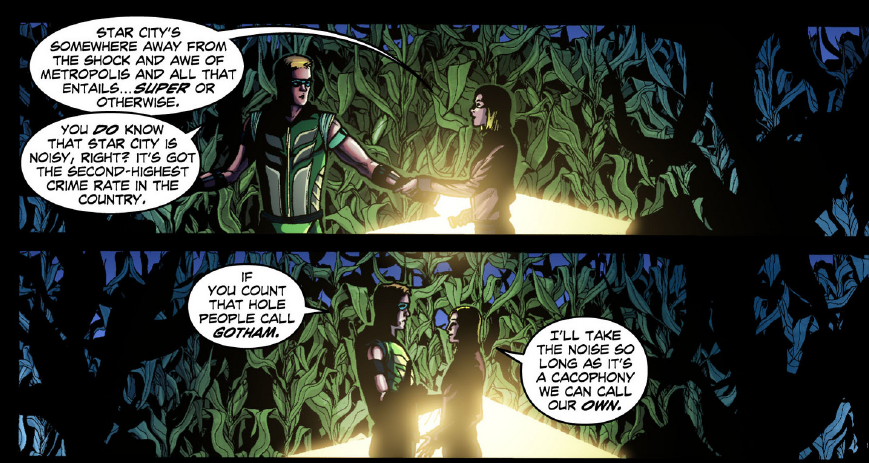 Not the answer you're looking for? Browse other questions tagged dc-animated-universe dc or ask your own question.

7
Why do people choose to stay in Starling City/Star City?

12
What prompted the strict continuity of the DC animated universe?
16
Has anyone ever ambushed Batman at the bat signal?
6
Did Bruce Wayne ever fight crime as a masked vigilante, before becoming the Batman?
8
Has the death sentence ever been introduced in Gotham?
12
What makes Gotham work as a major city?
9
Which version of the Teen Titans exist in the DC Animated Universe?
5
In the DC universe, which characters assumed the identity of the Red Hood?
1
In which city is Star Labs located?