Did Cersei lay out Lancel by punching him in the armor?

In Episode 9, Season 2 of Game of Thrones (Blackwater) at 44:40, we see what appears to be Queen Cersei punching Ser Lancel Lannister in his armored shoulder. She had just ordered Lancel to bring Joffrey to his quarters when the Battle of Blackwater appeared lost. Lancel did not want to, he claimed that the Knights of the Kingsguard lost their fighting spirit when their King wasn't leading them.

I've looked at the scene several times to try to make out a weapon, but I can't see one. Yet, after being punched in the armor by a woman of apparently average strength and size, Lancel writhes on the floor, moaning.

What am I missing?

I don't remember that scene in A Clash of Kings (which I no longer have), but I would happily accept an answer from the book or the series.

Cersei did not punch his Armor. Cersei deliberately hit him where he had taken a wound during the battle to get him out of her way.

So It was not like Cersei had hit him with a super-human force, It was just the wound which caused Lancel to Writhe in pain and cry.

Lancel returns to Cersei to warn that they are defeated unless Joffrey returns. When Lancel tries to be firm with her, Cersei ignores his counsel, pushes him out of the way (deliberately causing him pain by hitting his injured side), and storms out.

Lancel was wounded by an arrow during the battle when he accompanied The Hound for his sortie beyond the gates as pictured below: 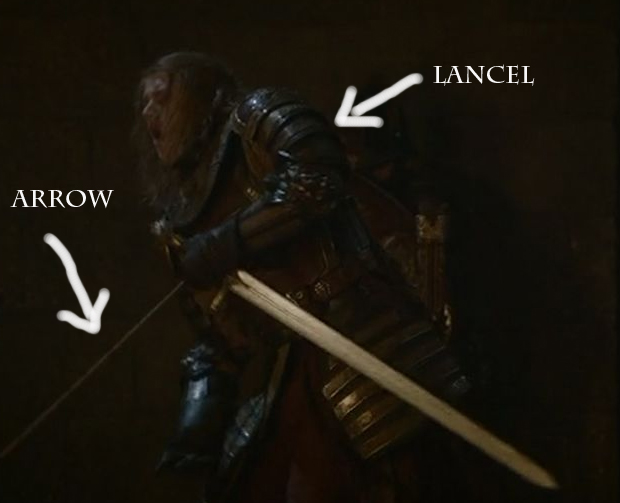 The scene in which Lancel is wounded occurs at 34:15 of Blackwater.

In the ACOK the event happened in this way:

“Cersei,” Ser Lancel pleaded, “if we lose the castle, Joffrey will be killed in any case, you know that. Let him stay, I’ll keep him by me, I swear-”

“Get out of my way.” Cersei slammed her open palm into his wound. Ser Lancel cried out in pain and almost fainted as the queen swept from the room.

6
When did Cersei have Robert's illegitimate children dealt with (in the books)?
4
Out of universe reasons for the scene with Cersei and Taena?
22
How did Ned see Cersei more recently than Robert?
7
Who is the second Kingsguard at the Tower of Joy?
9
So how did Cersei do it?
11
Who were the Kingsguard escorting Cersei?
8
How did the White Walkers get their weapons and armor?
8
Why did Cersei ask this of Jon?
10
How could Cersei arrange for the King to raise Jaime to the Kingsguard?
24
How well-known was Aerys Targaryen's madness outside the noble class?