Did Nightcrawler ever get to be a priest?

Nightcrawler for a long time thought he had managed to become an ordained priest, but for some reason this was retconned as an illusion and all his hard work was undone.

Did he eventually become a priest?

Nightcrawler was quite sure he became a priest

In X-Men #100 (May 2000), a 6 month gap has occurred and we discover that in the intervening time, he began studying to be a Roman Catholic priest. 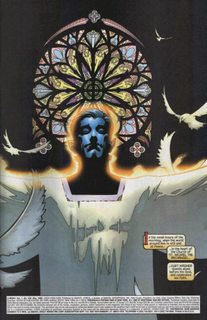 In the small hours of the morning, when the world around him is still and at Peace…

…in the heart of ST. MICHAEL THE ARCHANGEL…

KURT WAGNER stands alone before his God, and celebrates his faith.

For quite a few issues, he says he is studying to be a priest, occasionally leaving the X-Men to focus on his studies. In Uncanny X-Men #408 (September 2002), he said for the first time that he was ordained, although we did not see a ceremony.

And then his teammates told him that it was an illusion

In Uncanny X-Men #424, Nightcrawler discovered that his teammates had no recollection of him studying to become a priest, and were quite sure he wasn't. 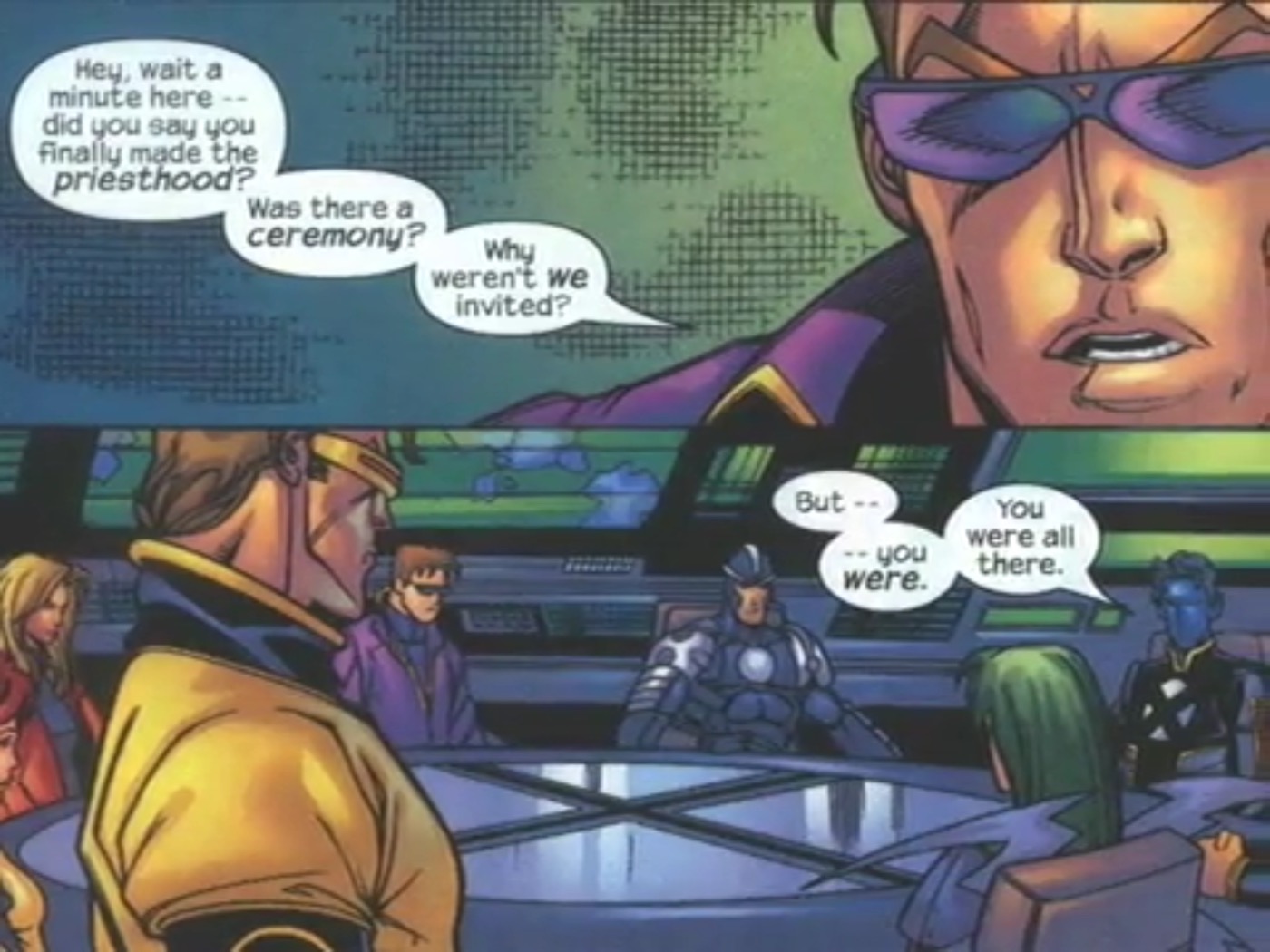 Havok: You were a priest? That's a joke, right?

Nightcrawler: A joke? No, not at all Alex. I've been studying for years now. I was recently fully ordained. Why do you find that hard to believe? […]

Ice Man: Hey, wait a minute here -- did you say you finally made priesthood? Was there a ceremony? Why weren't we invited?

Nightcrawler: But -- you were. You were all there.

We find out later that this was all a convoluted plot from the sinister Church of Humanity to overthrow the Catholic Church, which involved Nightcrawler thinking he was a priest so he could eventually become the Pope.*

Behind the scenes, Chuck Austen started writing for Uncanny X-Men around issue 410. It seems Austen did not like having Nightcrawler be a priest, and within the next few issues, Nightcrawler began having a crisis of faith. This culminated in the incident described above in which he found out his entire study to become a priest was an illusion.

Since then, he has not tried to become a priest again

For a variety of reasons, Nightcrawler has continued to have doubts of faith despite being religious over all. He has not tried to become a priest again since this incident, perhaps due to how traumatic it was.

He does officiate Deadpool's wedding, but does not wear a priest collar

Nightcrawler officiated at Deadpool's wedding in Deadpool #27 (April 2014). Clergy commonly officiate weddings, but Nightcrawler is clearly wearing a necktie, rather than a priestly collar that would be worn by Catholic priests. 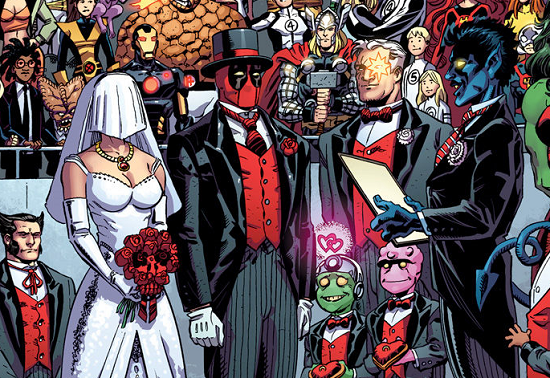 Unfortunately, there isn't really any context to Nightcrawler being the one officiating the wedding: he's just there without explanation.

It's most likely that the writers just figured that because clergy often officiate weddings, the only Marvel character who has ever been a clergy should officiate it. However, Nightcrawler at this point in his own comic series does not consider himself to be a priest. He has also never officiated a wedding aside from this one (and given how Deadpool's stories are often fuzzy with canon, it's not clear if that's something Nightcrawler is normally able to do).

* Basically, Nightcrawler's main teacher was secretly a member of the Church of Humanity and had been tampering with his memories. They had a convoluted plan to overthrow the Catholic church involving making Nightcrawler become the Pope, making his image inducer fail at a key moment so that the world sees that the Pope has a demonic appearance, and timing that with a delivery of nano-tech laced communion wafers to every Catholic church on the planet so that when people ingested them, their bodies would disintegrate. Then the Church of Humanity planned to tell everyone that the demon-looking Pope was the anti-Christ and all the exploding churchgoers were being taken up by the Rapture. This plan makes no sense whatsoever for a variety of reasons (most notably that the Rapture is not part of Catholic theology, so the whole plan is bound to fail). Needless to say, this is often pretty high up on "worst story" lists.

Thanks to Geeks Out and Nightcrawlers.com for providing much of this information.

According to Wikipedia, yes and no.

Wanting to devote more time to priesthood, Nightcrawler shares team leadership with Archangel. However, his work as a priest is ret-conned to be an illusion; he had, in fact, never attained priesthood.

At first he did attain priesthood which was a reason he left the X-Men, so he could devot himself to his studies, but later, it was changed to it all being an illusion.

I also remember a story arc where Nightcrawler was trying to become the pope or a high up clergymen, but his image inducer was sabotaged. All as a plan from a renegade nun who was raped and/or molested by some priests and wanted to take the whole religion down by proving there were demons in the clergy. I couldn't give you an issue or anything, this is only from memory.

Nightcrawler could be a diacon, the first step to preasthood, so he is allowed to wed someone and get married (in the future).

20
Are there X-Men with mundane powers?
4
Why does Nightcrawler get called “elf”?
15
Was Xavier's surprise at Magneto's helmet ever retconned?
13
How effective is “spider-sense” against different forms of teleportation?
11
Can Nightcrawler escape Spider-Man's web by teleporting?
7
Is the Trial of Jean Grey just a complete misunderstanding?
10
Robin pretends to be evil to get close to a villain
3
Did Professor Xavier ever show regret for altering Spider-Man’s memories?
1
Has the filial relation between Nightcrawler and Mystique, from the comics, been explicitly excluded from the X-Men Cinematic Universe?
2
Did Superboy [Conner Kent] and Batgirl [Cassandra Cain] ever date?