Has Galactus ever been depicted as anything other than a humanoid?

Galactus, the Devourer of worlds, is depicted as a humanoid in the comics and according to Wikipedia:

His true form cannot be perceived by most beings; each species sees Galactus in a form they can comprehend, similar to their race or a deity of their religion. 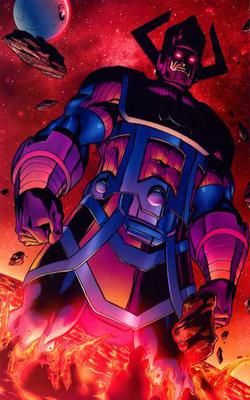 In Fantastic Four #521, Johnny Storm (the Human Torch) is the new Herald of Galactus confirms it by saying that the form of Galactus his brain registers is something that he can comprehend (image below). 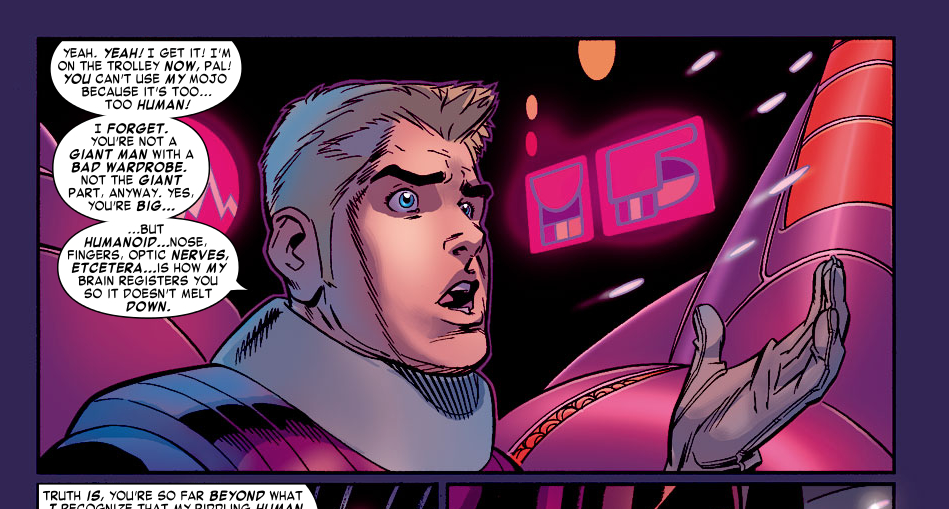 Are there any comic book appearances where Galactus is shown to have appeared as something that the alien species can comprehend (i.e. a non-humanoid appearance)?

In Fantastic Four Vol 1 #262 (1984), Reed Richards is put on trial by the Shi'ar empire for having saved the life of Galactus several issues previously. The trial is held in a large arena, with representatives from a large number of alien races present.

During the trial, Galactus appears as a character witness on behalf of Richards. The artwork when he appears makes it clear that each being present perceives Galactus in his, her, or its own way: 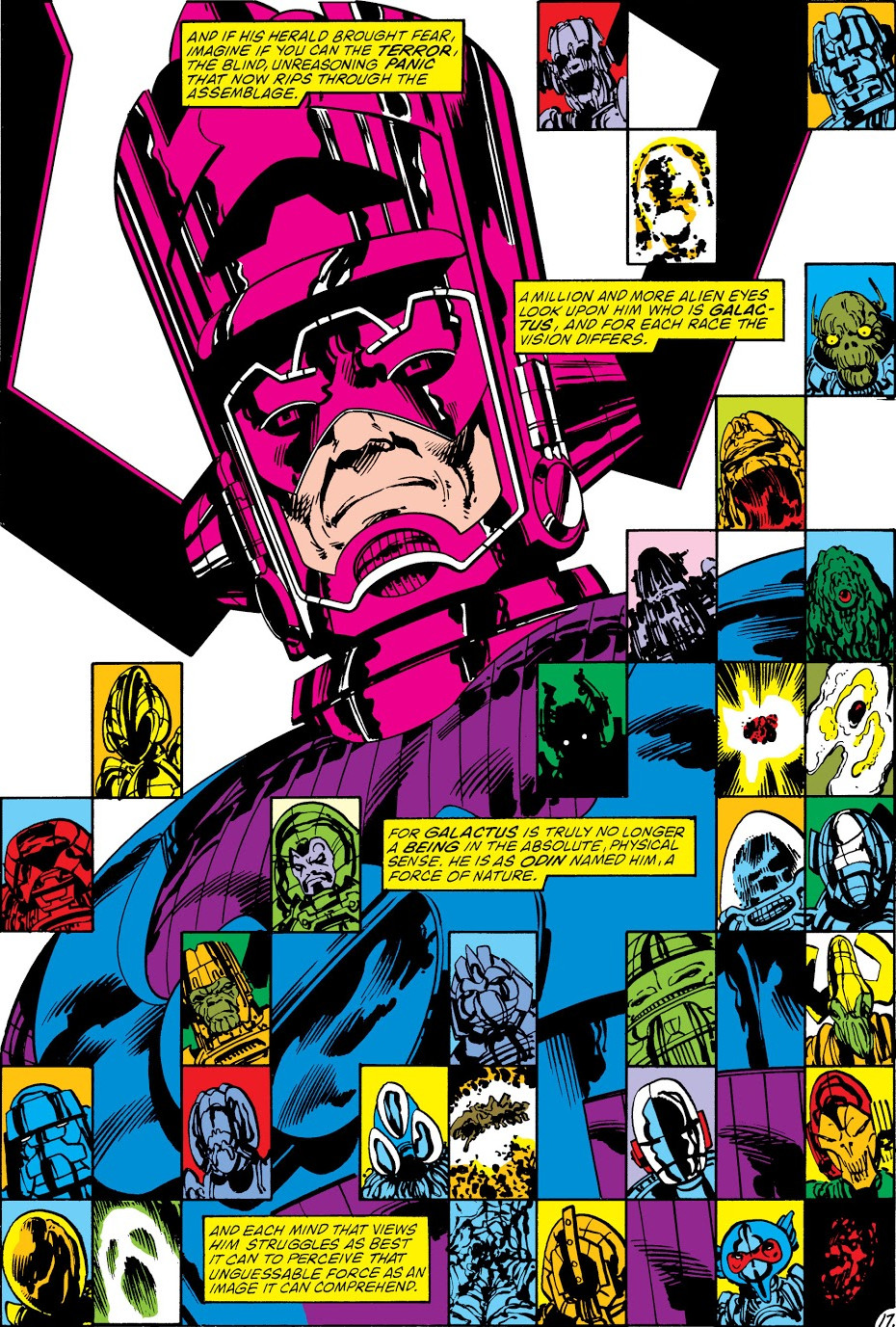 Here is a blog entry which talks about issue #262 in some detail, if you're interested.

Well, she's not alien, but Squirrel Girl's sidekick Tippy-Toe sees Galactus as a giant squirrel in The Unbeatable Squirrel Girl #4: 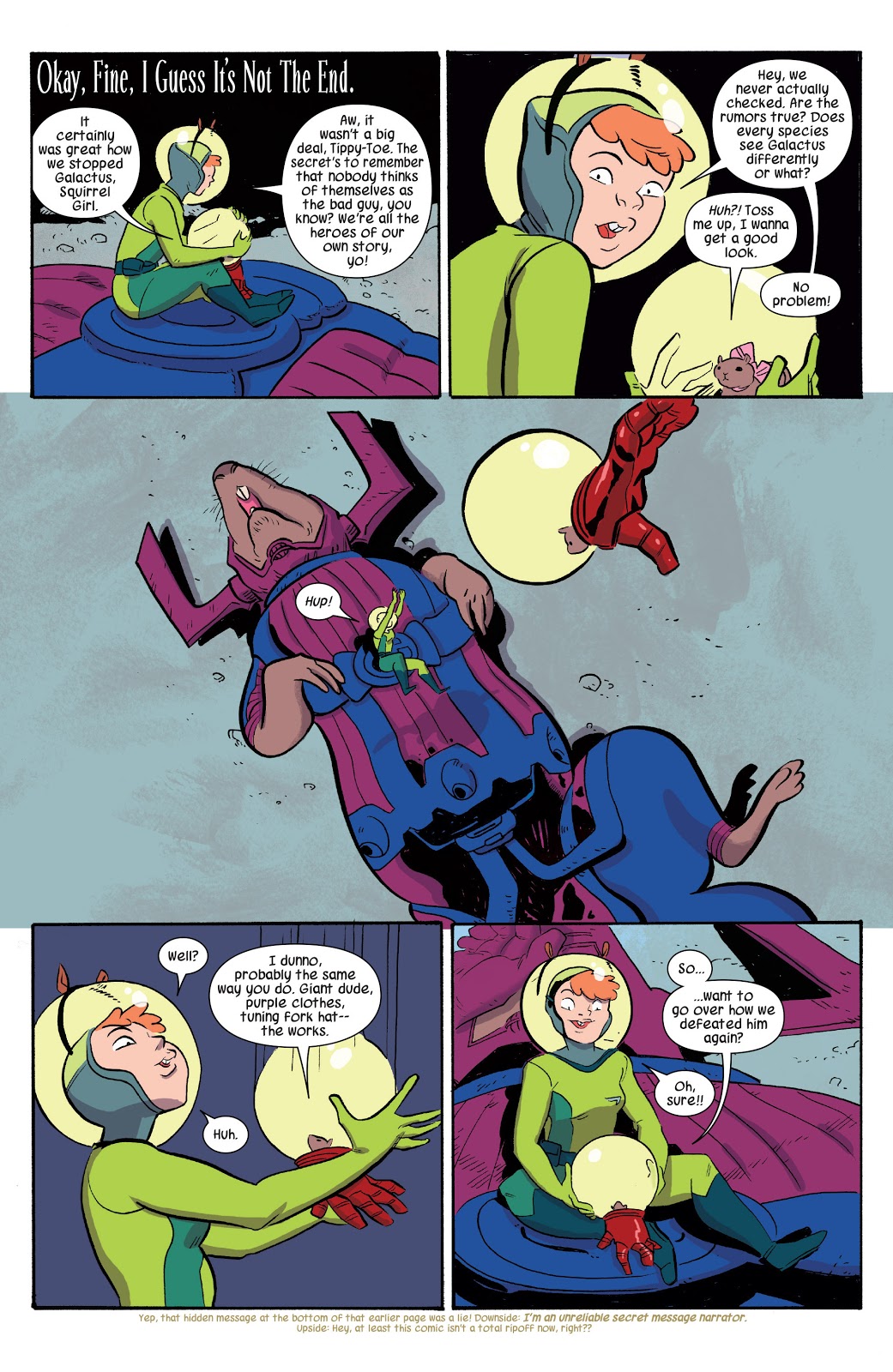 In the Ultimate universe, Galactus takes the form of Gah-Lak-Tus, a type of hive-mind being composed of many robotic drones. 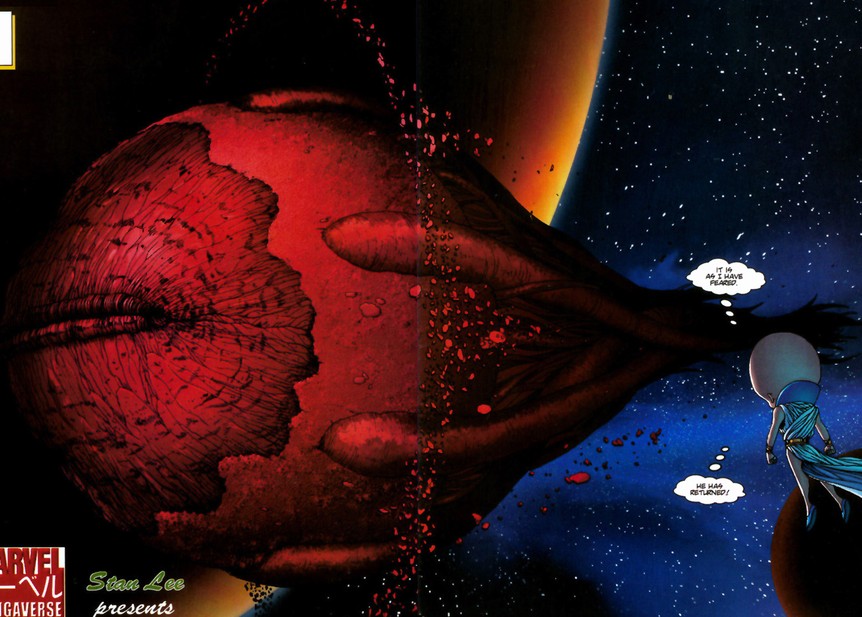 In the Mangaverse (Earth 2301) Galctus takes the form of a red living "planet" that consumes other planets.

In the live-action movie FFRSS, Galactus is portrayed as a "Cosmic-cloud" type being, with no clear form.

Edit: IN FFRSS, the "Cosmic Cloud" might have just been a shroud around Galactus's traditional humanoid form. Outlines of him can be seen in the film. 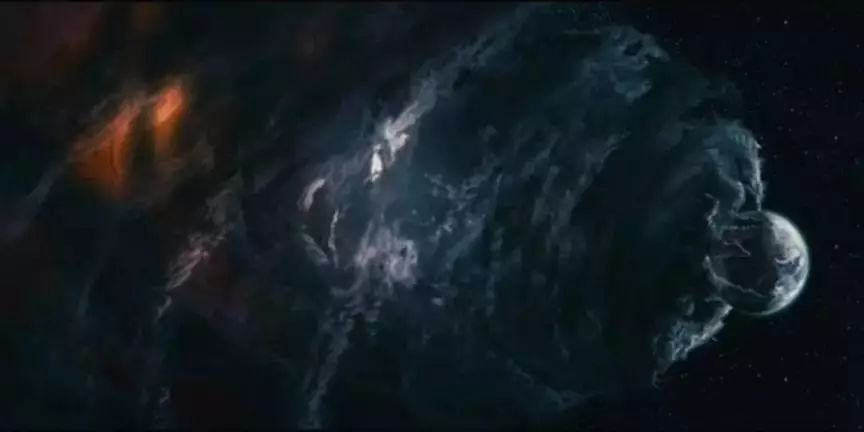 In the Ultimate Galactus Trilogy, set in the alternate Ultimate Marvel universe, "Gah Lak Tus" is a swarm of sentient ships. 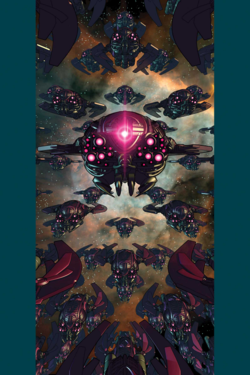 The page @Kenster already posted is probably the best one for what you asked for: the way different races of people perceive him. (A second version at Wikicommons with better color.) Here's another octopoid form that hasn't been posted yet. (Mangaverse, I think.) There are three side points, though.

First, the image of Galactus in any comic book defaults to humanoid even in the complete absence of humans. You could imagine that as an artifact of the comic/audience itself, converting a primordial reality into something they are able to comprehend. Really, that's nonsense and the idea of Galactus's mindbending was just one writer's idea. It hasn't been rigorously followed by others.

Second, Galactus himself is humanoid. (Super-Villain Classics: Galactus the Origin, No. 1) He was Galan of Taa in the last universe that crunched before creating this one.

He merged during the crunch with the 'Eternity' of the old universe, but both that entity and his duplicate in our present universe are nearly always depicted as an enormous humanoid form with stars and spacescapes within.

That 'true' shape of our universe's Galactus has appeared in Silver Surfer, Vol. III, No. 10. It's a brighter version of the same idea:

Third, so far there have been three separate Galactuses who've had their Galan aspect killed and their raw cosmic force processed into enormously powerful 'Galactus engines'. In each case, those machines maintained the form of severed heads &c. similar to the standard Galactus; none of them have been clouds, raw energy, or shifting substrates.

5
What would a picture of Galactus show?
4
Has anyone's perception of Galactus ever changed?