The book was about a group of escape convicts tasked to hunt down a stolen ship and when they find it, they find it's powered by human bodies. The main character is a female they dubbed Queeny and she is altered somehow by an injection. It's later found out that the enemy is actually an ancient order of vampires.

The ancient order of vampires, attacks and destroy a space station in the beginning of the book.

Does anyone have an idea of the name of this book? It's recent within the last 5 years.

story-identification novel military-sf
share | improve this question | |
edited May 31 '18 at 2:43

This is M.R. Forbes's Hell's Rejects, published in 2017, first book of the Chaos of the Covenant series. 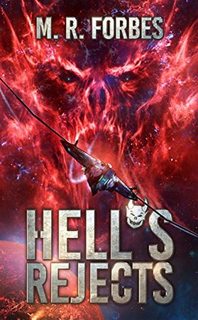 The most powerful starships ever constructed are gone. Thousands are dead. A fleet is in ruins. The attackers are unknown. The orders are clear: Recover the ships. Bury the bastards who stole them.

Lieutenant Abigail Cage never expected to find herself in Hell. As a Highly Specialized Operational Combatant, she was one of the most respected soldiers in the military. Now she's doing hard labor on the most miserable planet in the universe.

The Earth Republic is looking for the most dangerous individuals it can control. The best of the worst, and Abbey happens to be one of them. The deal is simple: Bring back the starships, earn your freedom. Try to run, you die. It's a suicide mission, but she has nothing to lose.

The only problem? There's a new threat in the galaxy. One with a power unlike anything anyone has ever seen. One that's been waiting for this moment for a very, very, long time. And they want Abbey, too.

The vampires are the results of nanites, "The Gift", which Abbey does get injected with. This review mentions the space station being destroyed. Abbey apparently does get called Queenie as per this quote:

Later books establish that she's picked up the nickname of The Demon Queen, with the fourth book entitled Kill the Queen. This review of the second book, Fire and Brimstone, summarizes a number of matching points from the prior book:

Her team is comprised of prisoners which were sentenced to the prison planet name Hell. Abigail was also sentenced there even though she had been framed for the charges .... Now these guys and gals are all hardened criminals. They did what ever crime they were sentenced to Hell for and that’s a fact. Abbey, on the other hand, is pretty innocent, but she’s a Lieutenant full of self-righteous indignation and now, something called the “Gift”. It was injected into her just before the breakout from Hell .... The “Gift” also has to be fed. It seems it can exist and sustain itself by consuming huge amounts of food. In ordered to grow in strength, Abbey is aware that she has a hunger for blood of others with the “Gift”. That’s now getting into the realm of vampires and stuff, but I don’t think it’s the same thing.

Further reviews on that book mention the Queenie nickname and the text for the third book, The Devils Do, names the "vampires" as "Nephillim".

Not the answer you're looking for? Browse other questions tagged story-identification novel military-sf or ask your own question.

6
Teen soldier's brother is killed by the military, she goes on the run with the framed killer
7
movie where people rented empty bodies to travel
7
Book involving Alien Invasion, enslavement of human race
5
A book where a man inhabits the body of a dying man and befriends a telepathic cat
10
Searching after a science fiction book/series about Galactic war with a weaker Human/Alien Alliance vs. Another hostile alien race
13
Looking for space spy book with female protagonist
12
Science fiction novel with forced sex change
2
Kindle superhero series including an army guy in powered armor, a self-aware robot, and a teleporting thief