80's-90's movie with a brains-powered spaceship

Its main character was an obese women captured(?) along with a bunch of other people and she was sent to a RM on a metal table that made her thin and beautiful. She also teamed up with a robot head that fell in love with her (and was kinda pervy) and would unlock the doors for her to escape this place she had been captured.

I also remember there was a spaceship that had 12-8 brains that 'talked' and powered the space ship(?). The space ship and brains were important to the movie but I don't know why.

There were also these worm alien monsters that had been released in this futuristic gladiator arena. 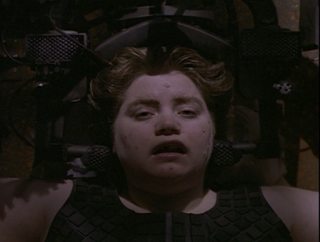 During the pilot episode the obese woman, Zev/Xev Bellringer, was a prisoner made thin and conventionally attractive to serve as a sex slave/robot, but the process was interrupted, and she retained her own sense of self. This character was played by at least three actors during the show's tenure: the two during the pilot, and another when the second actor left the show, and the story was written to explain the character's physical transformation. Zev appears above pre-transformation, and below left post-first transformation holding 790. Xev post-second transformation appears below right. 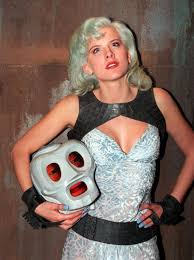 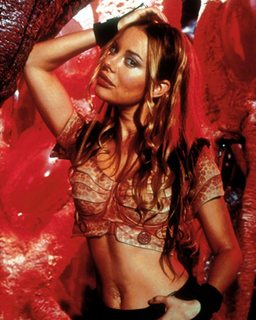 The robot head obsessed with Zev/Xev is 790, and is accurately described in the OP's question.

The spaceship is a living organism and is the titular Lexx (pictured below). Much of the show's situational comedy derives from the experiences of the main characters living inside a living ship (there are some parallels with Farscape's Moya). 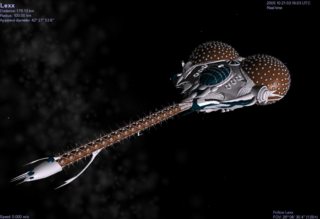 The two other main character's were the chauvinistic, ultra-dweeby & pervy captain of the Lexx: Stanley H. Tweedle (below left), and the somewhat undead emo Brunnen-G space-warrior Kai (below right). 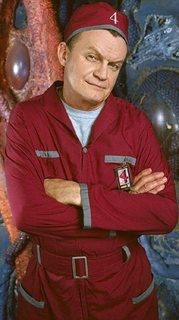 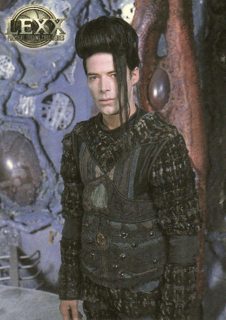 3
Futuristic "Govt + Army against rebels" movie with a female central character
6
Identify a 90's Disney movie featuring spaceship "surprise" and futuristic Neo Nazis
13
Science fiction movie with a hallway lined with brains and a conveyor with saws
5
Looking for a creepy worm in a movie scene
23
Trying to find the name of the movie where young men entered a cyber world and meet a girl with pink hair
9
Movie with forest eating the moon?
18
Animated 70s/80s movie or series with haunting soundtrack and an egg shaped spaceship
14
Scifi book with 57 Heinz Varieties powered spaceship