In the comics, have any of the Robins called their costume “target attraction” for villains?

In Season 1 Episode 6, "Jason Todd", of the live-action Titans (2018) series, the new Robin (Jason Todd) rescues Dick at Dr. Adamson's apartment. In the conversation between them that followed, Dick says:

Dick: He lets you drive the Batmobile? Wouldn't you rather have your own name? Like "Sparrow" or "Blue Jay," for "Jason"?

Jason: Fuck, no. The whole point is being Robin. Batman needs Robin.

Dick: Why do you think he makes us wear those lame colors? 'Cause we're drawing fire. "Look over here, assholes!" Then boom, the Bat lands and starts trashing ass.
Titans: Season 1 Episode 6 ("Jason Todd")

Was this comment by Dick, taken/inspired from the comics where Dick (or any other Robin) said something similar?

Looking for the story arc where this happened.

There is some complaint by Dick Grayson to Batman in Grayson: Futures End and he does state something similar to what is said above in Titans. Batman also gives a nice explanation for why Robin should wear bright clothing rather than the dark that he wears. 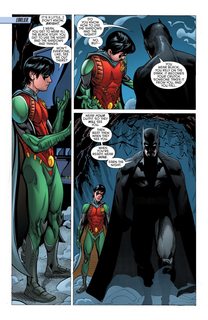 Robin: It's a little, I don't know, bright. I mean, you get to wear all the black stuff. You get to use the night and the shadows and things. Won't everyone, like, see me out there?

Batman: Do you know how to use the shadows and the night?

Batman: You wear black, you rely on the dark. It becomes your crutch. Someone takes it from you, and you fall.

Batman: Wear your outfit so they will see you. Then beat them when they see you. When you're ready, wear mine. Earn the night.

Not the answer you're looking for? Browse other questions tagged dc comics titans-2018 or ask your own question.

9
Are SF comics considered for the same awards as books?
19
How have Superman comics dealt with the Man of Steel, Woman of Kleenex problem?
6
In the comics, who made Daredevil's costume?
4
Have any comic book villains tried a plan like Ultron's before?
60
Did the writers of Wonder Woman have some kind of fetish for bondage, in the early comics?
17
What superheroes have worked for the Daily Bugle in the comics?
5
Did the five Robins ever meet each other in the comics?