This is a story I remember picking up at the library and reading sometime in the last decade (probably around 2015, so unfortunately the timeframe won't help much). It was in the USA in English and it was paperback. The plot looks something like this:

The story starts off with someone (I think a woman, let's just call her "Person A") being taken prisoner after murdering the crew of what I think was a "space yacht". Person A is taken prisoner on a moon colony and is being transported somewhere in a flying car, when she manages to break out and escape. This is where the details get a bit fuzzy. I think she manages to hire some sort of private investigator/mercenary to protect her from being imprisoned. Meanwhile, the detective who's been assigned to the case manages to hack into the systems on the space yacht and gathers some evidence. We later learn that Person A was wanted for some crime (I think aliens were looking for her), and hired some people to give her a new identity as a textile worker on Mars and smuggle her off Earth. Once she was on the space yacht, she learned that the smugglers were actually going to sell her out to the aliens, so she murders the crew in an attempt to escape. One of the last things in the book was that the detective guy quits his job with the police and offers to take over the agency run by the private investigator/mercenary (they were friends I think).

There was also a plot where someone (possibly the escaped prisoner, although I'm unable to convince myself entirely that they are the same person) talks to a lawyer to try and help them out. I think the lawyer is hesitant, as the aliens that are looking for her (I think they were called wiglins) have a rather strict legal system, and according to him, "nobody has managed to challenge a wiglin warrant in over 70 years."

Some other random details I remember.

I have no clue why I remember this book, it was basically in the back corner of the library and I read it because I didn't have much else to do.

The Disappeared by Kristine Kathryn Rusch (2012)

Snippet of the synopsis: "Now three cases have collided: a stolen spaceyacht filled with dead bodies, two kidnapped human children, and a human woman on the run, trying to Disappear to avoid alien prosecution."

Below are quotes from the book that match what you've described:

new identity as a textile worker

With a sigh, Ekaterina shifted position, and continued to read. Her new job was recycling textiles.

The map function. She typed in Von and added that it had to be in territory that could be occupied by humans. She only got one hit.

It was on Mars.

nobody has managed to challenge a wiglin warrant in over 70 years.

He knew from his studies that no Wygnin warrant had been successfully challenged in the last fifty years.

She's rich and has a large mansion

Ekaterina Maakestad stood in the bedroom of her Queen Anne home, the ancient Victorian houses of San Franciscoâ€™s oldest section visible through her vintage windows, and clutched her hands together."

Covers of the book: 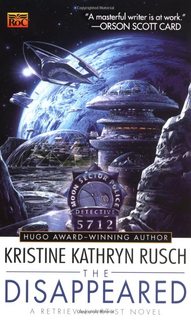 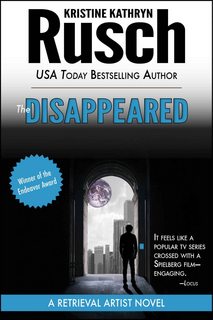 Not the answer you're looking for? Browse other questions tagged story-identification novel space crime or ask your own question.

6
Moon base, magnetic trap, and spider-like aliens in space
13
Sci-Fi detective novel, genetically modified humans
8
Short stories book (80s?), one story about a detective falling in love with a woman in a rocket-lauching station; other story had lobster monsters
22
Story: space colonization with sentient/telepathic spaceships, also genocide and reincarnation
7
Short story about space sheep and an inflatable doll
8
Novel with space suits made of strange material, disruptor knives that melt people, and nonhuman characters