Spider-Man and his Amazing Friends comic from the early 80s

I had a comic when I was younger that I believe came with the Sunday paper in the US, specifically Colorado. It was branded as 'Spider-Man and His Amazing Friends', the same as the cartoon of the time featuring Spider-Man, Iceman, and Firestar. In the comic, they battled the Abomination not the Green Goblin as in the official comic (Spider-Man and His Amazing Friends #1). I believe this comic was put out regionally and was associated with one of the large department stores in my town (I believe May D&F). I cannot find any mention of this comic anywhere. Would a comic like this in any way be considered canon? I would assume it had the blessing from Marvel when it was put out.

This is Spider-Man, Firestar and Iceman: Danger in Denver Vol.1 #1. 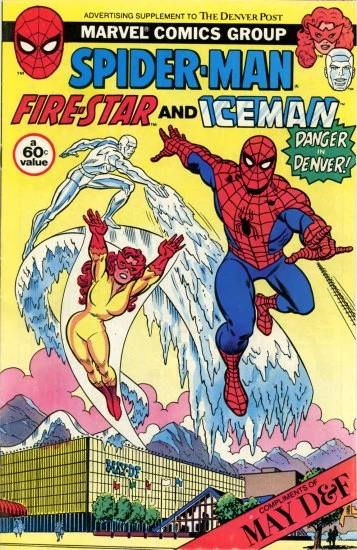 This was a special for the Denver Post in 1983 in which our heroes fight the Abomination at the NORAD complex in Colorado. 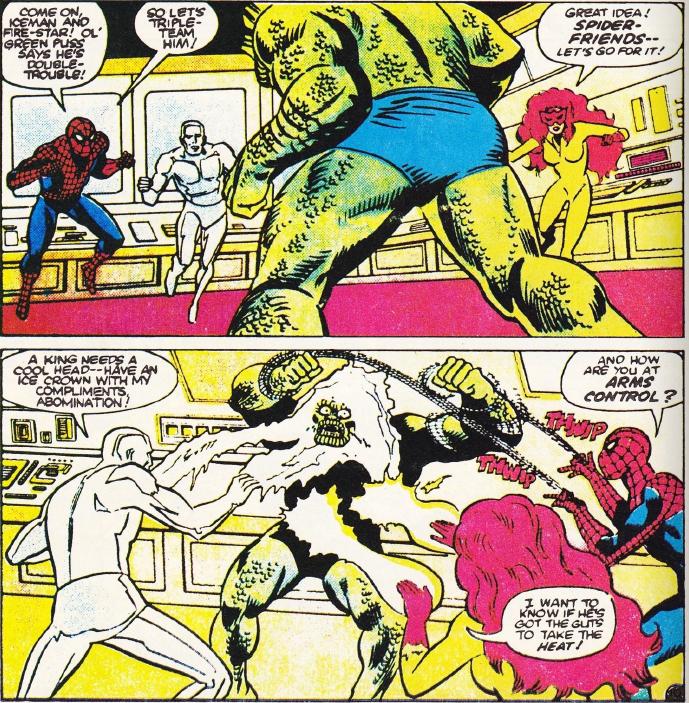 The comic you're referring to is listed on the Marvel Database website as Spider-Man Firestar Iceman Danger in Denver #1 (1983).

The site also has a page for the other comic you mentioned, Spider-Man and His Amazing Friends #1 (1981).

It's pretty safe to say that neither of these issues are canon to the mainstream comics for a number of reasons.

For one thing, the Official Handbook of the Marvel Universe lists the first appearance of the mainstream comics (Earth-616) Firestar as Uncanny X-Men #193 (1985), and specifies that her prior appearance in Spider-Man and His Amazing Friends #1 was set on Earth-8107. 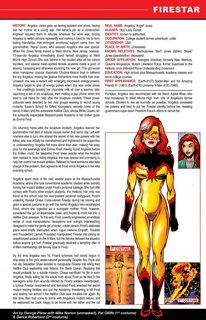 Official Handbook of the Marvel Universe A to Z #4 (September, 2008)

Spider-Man Firestar Iceman Danger in Denver #1 isn't mentioned in the OHOTMU, however, given that it was published approximately two years prior to Uncanny X-Men #193 (the issue that's listed as Earth-616 Firestar's first appearance), that's an indirect indication that it isn't canon.

This is backed up by an advertisement for Firestar's 1986 miniseries, which only acknowledged her prior appearance in X-Men.

She's been a staple on Saturday morning television for a number of years now, but so far she has appeared in only one regular Marvel comic. That's about to change. Get ready to meet the latest addition to Marvel's mutant line-up in a four issue Limited Series, FIRESTAR.

Written by Tom DeFalco and illustrated by Mary Wilshire and Steve Leialoha, FIRESTAR will reintroduce us to the character who made one brief appearance in the X-MEN. We'll learn a lot about this mysterious young girl, her powers, and why she became a member of the Hellfire Club-controlled Hellions! 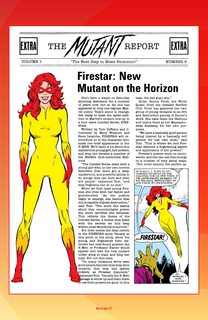 Also, in Spider-Man Firestar Iceman Danger in Denver #1, the three title characters are depicted as being good friends and familiar with one another's secret identities, much as they were in the Spider-Man and His Amazing Friends animated series. 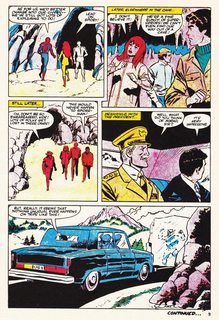 By contrast, when Firestar introduced herself to Spider-Man in Web of Spider-Man Vol. 1 #75 (published eight years later), they each spoke as if they'd never met before.

SPIDER-MAN: From the New Warriors, right? I've heard of you kids. 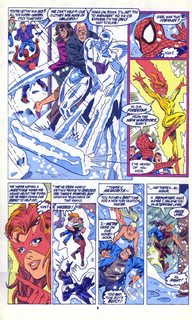 They were later revealed to have had at least one prior meeting in Spider-Man Family Featuring Amazing Friends #1 (2006), but that story wouldn't have been set much earlier, since Firestar was acknowledged as being a member of the New Warriors, a team she didn't join until 1989. And again, she wasn't portrayed as being very familiar with either Spider-Man or Iceman in that issue. They'd both clearly heard of her, but this may be the first time they'd actually met her in canon.

ICEMAN: Oh-- Firestar. You're one of those New Kids, right?

FIRESTAR: So, hey, are you guys out on patrol or what? All my teammates are being boring tonight. Maybe you could use an extra hand?

ICEMAN: Heh! Listen, we're seasoned super heroes. I mean, it's not that we don't appreciate it-- you just wouldn't be able to keep up.

FIRESTAR: Uh... excuse me? I think the problem is you're too old to keep up with me.

ICEMAN: Too-- ah-hah! Is she for real? You hear that, Spidey? Too old! 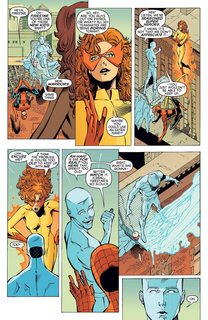 Spider-Man and Iceman had met several times prior to this, and Spider-Man did know that Iceman was Bobby Drake. However, back in the '80s, Spider-Man was extremely protective of his secret identity, and didn't reveal it to any other hero, except his girlfriend, the Black Cat. Daredevil and Wolverine discovered his secret identity with their superhuman senses, but Iceman and Firestar almost certainly wouldn't have learned of it until he revealed it to the general public during the "Civil War" storyline in 2006.

Spider-Man later enlisted the help of Dr. Strange, Mr. Fantastic, and Iron Man to erase all knowledge of his secret identity from everyone except Mary Jane Watson, and while he subsequently re-revealed it to select heroes, such as the Fantastic Four and several Avengers, he's never been especially tight with either Iceman or Firestar in canon, and they're not currently among the heroes who know who he really is.

One other thing to note is that Iceman is described as a "teenager" in Spider-Man Firestar Iceman Danger in Denver #1...

Bobby Drake, an outgoing, fun-loving teenager, was born with the mutant power to turn himself and any moisture around him into ice. He fights evil and is known as Iceman! 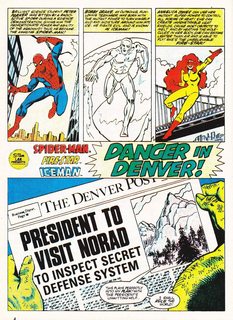 ... whereas the Earth-616 versions of he and Spider-Man were college graduates in their early twenties by 1983, the year that comic was published. Spider-Man completed his first year of grad school that same year, as shown in Amazing Spider-Man Vol. 1 #243. Firestar was still a teenager when she made her first canon appearance in 1985, and according to her OHOTMU entry, she was only 19 years old during her time as an Avenger in Avengers Vol. 3 (1998–2004).