Has Batman ever fought Hawkman?

My children are going through a comic that they just got today in the mail and it has a 'Tourney' set up to find out who the best villain and superhero is and then who would win in the fight. The first matchup is "Hawkman vs. Batman".

I like Batman (so I am biased) but are there any instances in which they have actually fought each other, and if so, who won?

TL;DR - If Hawkman fought Batman in a stand-up fight, he would defeat Batman with relative ease. In addition to being stronger, possessing regenerative powers, greater speed and the ability to fly, he also has a wide range of lethal weaponry.

The standard response to this argument is that if Batman knew a fight was coming, there's really no-one he can't defeat, up to and including Superman.

Batman fought Hawkman in JLA #119 as part of the "Crisis of Conscience" story arc. Since Batman was under Despero's mind-control, Hawkman wasn't looking to kill him but merely subdue him. Batman ended up slugging him and Hawkman backed off. Despite taking a solid punch right in the face from Batman, on the following page Hawkman seems quite well, albeit rubbing his jaw. 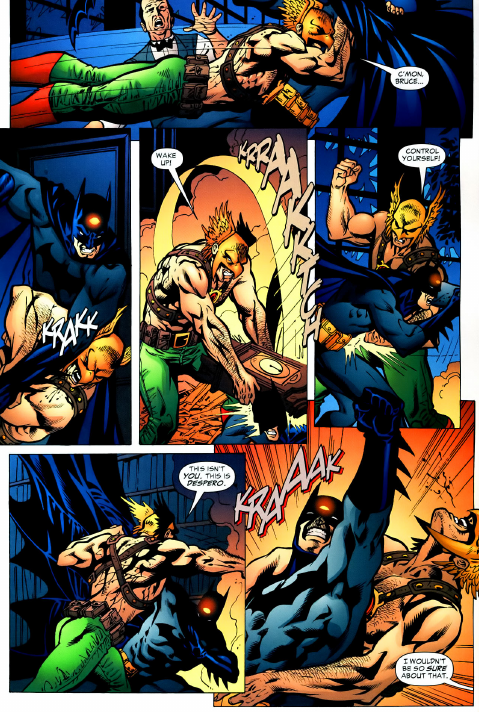 They also fought (briefly) in Public Enemies. Again, Hawkman has a substantial advantage, trapping Batman in a thrown web but doesn't move in for the kill, ultimately losing when Superman steps in.

7
Was the idea of Batman inspired by vampires?

4
When do Batman and Bane first fight?
18
Can anyone recognise this Batman villain?
11
Who is the doll maker that helps Joker escape in Dark Knight Returns?
11
What political beliefs have writers given to Batman?
4
Are These the Only 5 Fairy-Tale-Based Batman Villains?
13
Is Alfred the moral conscience of Bruce Wayne/Batman?
12
What is the meaning of the Hebrew characters that appear when a soul is absorbed into Ragman's suit?
2
Is the Batman who Laughs storyline in "Dark Nights Metal" part of its own story?
26
Looking for comic about female superhero who loses her powers