Why fifteen stars on the 'Star Wars' New Republic Insignia?

Has any reason been given as to why specifically fifteen stars appear on the insignia of the New Republic in the Original Expanded Universe of Star Wars (pre-Disney)? 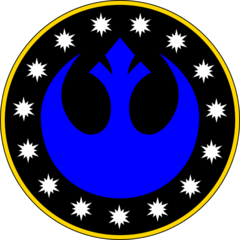 The insignia/seal/symbol of the New Republic is described on Wookieepedia here. The creator of this image lists the Heir to the Empire Sourcebook (pub 1992) as their source material. The seal has been reproduced elsewhere with varying color palettes. 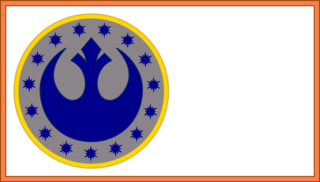 The symbol also appears on the flag of the New Republic. The creator of that image lists The New Essential Chronology (pub 2005) as source material. The colors differ partially, but the shape and number of stars match.

The stars symbolized the one community of the galaxy. It is mentioned in the article on Heir to the Empire Sourcebook (pg. 11):

The Provisonal Council of the New Republic government has adopted a seal which incorporates the symbol of the Alliance with a pattern signifying the member worlds of the galactic community.

The blue crest has been placed upon a circle of stars, signifying the galactic community. The New Republic is more than the government and the military, it is the people. The field of stars represents those people - whether they be Human, Wookiee, or some other galactic species.

The specific number of the stars is not explained in the article. However, the Declaration of a New Republic was signed by eight leaders of the Alliance of Free Planets, who later formed the New Republic Provisional Council. Only the total of nine councilors and their worlds are introduced, but with an additional mention:

Other members of the Council have included unknown representatives of the Ithorian and Sedrian species.

Not the answer you're looking for? Browse other questions tagged star-wars star-wars-legends symbols or ask your own question.

8
How did the New Republic gain control of Coruscant?
5
Why did Grand Admiral Thrawn fight the New Republic?
8
Why there is so little technological progress between times of Old Republic and Star Wars?
12
Will Disney Allow New Star Wars Legends Books?
9
Can the Death Star kill stars?
12
Why do some Jedi have red lightsabers in Star Wars: Republic?
3
Star Wars Eclipse-Class Super Star Destroyer
4
Did the Rebel Army in Star Wars have any in-canon rank and squad insignia?