While it would be entirely in character for that to simply be a joke, do we have any evidence that beskar can rust?

Like a lot of Mandalorian lore, this has been retconned. The most we know about long-lived Beskar that has been neglected would be from Boba Fett's armor. We first see it (post-sarlacc) in The Mandalorian in Chapter 9, where Cobb Vanth is wearing it as-is 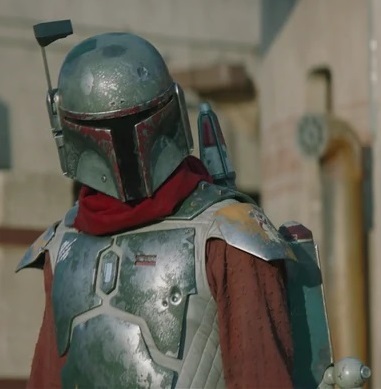 While the paint job hasn't held up all that well, there's not really any visible rust. Fett later regains the armor and repaints it, so we don't know if there was any rust we couldn't see.

Beyond that, the Empire smelted most of the Beskar into ingots, which would have removed anything like rust. Din Djarin's full Beskar set is fairly new in canon, and presumably Bo-katan's group from Mandalore are maintaining their armor.

The answer (so far) is: there are no known instances of it rusting, even if neglected

6
Why was Ranâ€™s space station destroyed by the New Republic X-Wing attack team at the end of episode 6 of â€śThe Mandalorian?â€ť
15
Why is beskar so important for Mandalorians?
12
What does Cara Dune's arm tattoo signify?
1
How was the Razor Crest able to leave the atmosphere?
11
What is a chain code and how do they work?
17
Can an X-Wing fighter comfortably accommodate additional passengers?
13
How did Ahsoka know the specifics of Anakin's fall?
8
What does Din mean that weapons are a part of his religion?